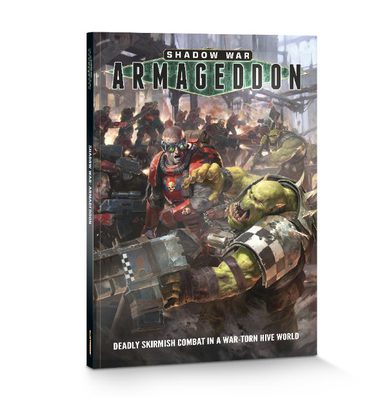 Armageddon is wracked with war. As hordes of ferocious Ork warriors surge across the planet, they are met in combat by the combined forces of the Imperium. The bloodiest and most gruelling battles are fought within the hives: the ancient, towering cities that are the last strongholds of Humanity.

Across Hive Acheron, elite squads of soldiers are deployed where larger armies are unable to operate. These guerilla fighters creep through the twisting pipes and gantries of the hive to strike deep within enemy territory. They are assassins, and saboteurs – they are the kill teams of Armageddon, battling over precious promethium in order to win the shadow war and decide the fate of the bitter battle that has engulfed the planet.

The Shadow War: Armageddon rulebook is a 200-page softback, featuring new rules and some features previously only available online:

- a short history of the brutal conflicts that have wracked the hive world of Armageddon since the notorious Warboss Ghazghkull Thraka decided to invade, in order to declare himself the true prophet of the Ork gods – and deliver a crushing blow to humanity;

- the Warriors of Armageddon: an overview of the main forces fighting over the hive world – Space Marines Scouts, Astra Militarum Veteran Squads and Ork Boyz Mobs – how they fight, why they fight and the wargear they employ;

- Core Rules: as you might expect, this is the set of rules you need to learn in order to play Shadow War: Armageddon. It covers the items you need in order to play and the characteristics of each fighter type, along with a breakdown of a game turn – this will teach you movement, shooting, hand-to-hand combat and recovering from injuries, along with an explanation of the mechanics behind using terrain.