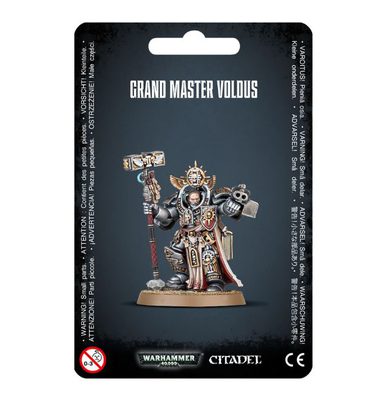 Aldrik Voldus, Warden of the Librarius, wields more psychic might than any Grey Knight seen in centuries. The very air crackles around as he focuses his mind and bends the colossal energies of the warp to his will. With a word, purifying flames pour forth from the head of his ornate Nemesis Daemon hammer – the Malleus Argyrum – turning Chaos-tainted flesh bone and armour into pillars of ash. Heretic war engines halt as their twisted machine spirits are rent from their chassis. In Voldus’ grip reality constricts, and the helms of his enemies are crushed by invisible force; just as easily can Voldus sharpen the minds of his fellow Grey Knights, allowing them to channel their reserves into strikes that can Bring Low all but the largest of Daemons.

This multi-part plastic kit contains the components necessary to assemble Grand Master Voldus, Warden of the Librarius. This is a miniature absolutely brimming with details, as befits a Grand Master of his power and reputation. His Terminator armour features numerous sacred inscriptions, along with plenty of skulls, chains and magical tomes. His legendary hammer, standing as tall as Voldus himself, is replete with purity seals and cabling reflecting its purpose as a conduit for his psychic energies, and he wields a wrist-mounted storm bolter on his left arm.

Grand Master Voldus comes as 7 components, and is supplied with a Citadel 40mm Round base.