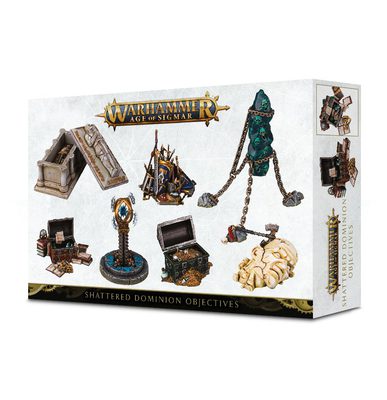 Used to mark the objectives fought over in games of Warhammer Age of Sigmar, these 7 plastic Objective Markers are designed to add an extra element of narrative to your games – each is evocative of the constant state of conflict found in the Mortal Realms. They’re every bit as detailed as the models used to actually fight the battles themselves:

- Hallowed Tomb: an ancient burial place for a fallen warrior, whose likeness is sculpted on the lid – this lid is removable, and the fighter’s remains can be seen within;

- Soul Stone: a floating stone, the surface of which is adorned with grinning skulls attempting to break through, which is tethered to the ground by 3 chains;

- The Realm’s Ransom: a chest filled with rather more mundane treasures – coins (some of which have spilled out onto the ground), goblets, jewels and a lantern. The lid of the chest can be modelled open or closed;

- Iconoclast Axe: a large fallen statue’s head, with a double-headed axe, which can either be modelled embedded in the head or left as a separate piece;

- Realmvault Key: a mysterious device featuring an orrery with Sigmarite comets orbiting a sun, used for purposes unknown, attached to a winch pulling it from the ground.

These 7 markers come as 26 components.