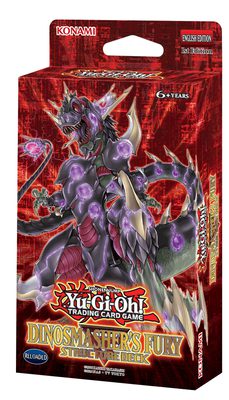 If you choose an envelope as the shipment method, we will open the original box and send only the contents.

Technology vs. Tyrannos! Take part in the ultimate battle between man-made monstrosities and the greatest predators nature has ever produced with the Machine Reactor Structure Deck and Dinosmasher’s Fury Structure Deck.

The Machine Reactor Structure Deck uses the popular “Gadget” series of monsters, most recently seen in Movie Pack Gold Edition, to power up gargantuan “Ancient Gear” monsters. You can add your Gold Gadget and Silver Gadget from the Movie Pack to this Deck to help Summon the new Ancient Gear Gadget – a monster that belongs to both themes and turns this Deck’s ace monster, Ancient Gear Reactor Dragon, into a 3000 ATK double-attacking, defense-piercing, card destroying behemoth!

The Ancient Gear theme first debuted in Yu-Gi-Oh! GX, the animated series that put Fusion Summoning at the forefront, so the Machine Reactor Structure Deck can be enhanced further with “Ancient Gear” Fusion Monsters from Raging Tempest and an upcoming Spell Card from Maximum Crisis that will let you Fusion Summon and Tribute Summon using the same 2 monsters in the same turn!