Yu-Gi-Oh Ghosts From The Past: The 2nd Haunting Display Box (5) 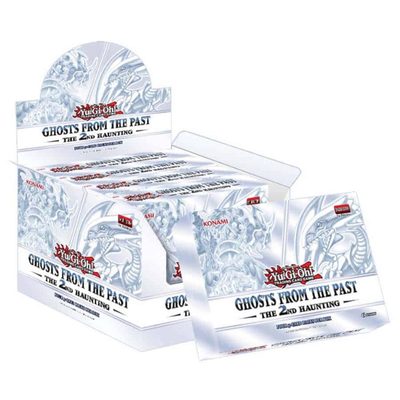 Includes 5 x Yu-Gi-Oh Ghosts From The Past: The 2nd Haunting boosters.

It’s not just the roster of Ghost Rares that’s expanded either – the drop rate has, too, so it’s twice as easy to pull a Ghost Rare this time around! On top of that, each box of the next Ghosts From the Past sethas 4 packs instead of 3, giving you even more cards per box!

The set size has also expanded to pack in even more cool cards! From new anime-inspired cards like Crystal Beast Rainbow Dragon and Decode Talker Heatsoul to a second chance to grab tournament mainstays like Crystron Halqifibrax and Number 97: Draglubion, you’re sure to find something that can power up your current Deck or inspire your next Deck!

You can add some extra punch to your Floowandereeze Deck with Raiza the Mega Monarch, pair up your Structure Deck: Albaz Strike with Aluber the Jester of Despia, and even show the world your D/D/D Deck means business with Go! – D/D/D Divine Zero King Rage! Fans of Yu-Gi-Oh! history will even get another chance to grab some fun old-school Fusion Monsters like Sanwitch and Rare Fish!