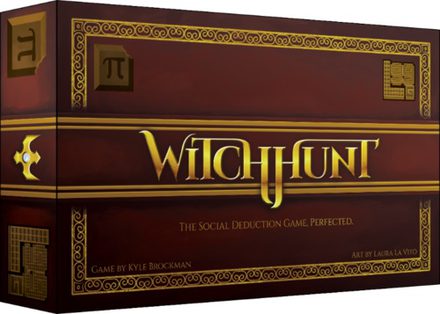 WitchHunt is a social deduction game.

Social deduction games involve a group of players with a number of enemies hiding among them.

The "town" must figure out who the enemies are before it's too late.

It's all about figuring out which of your friends are lying.

Just like Mafia or Werewolf, WitchHunt alternates between "day" and "night" phases.

Every day the town has a discussion and may vote to hang a target they think is a Witch. (The vote must be a majority, and of course the Witches hiding among them are voting too!)

Every night, players "sleep" as the Witches secretly wake up and agree on a player to kill.

WitchHunt is a no-flip game, which means players do not reveal their cards upon death.

ELIMINATION (FOR NO ONE)

In some social deduction games, players are gradually killed and eliminated from the game.

This produces a dramatic experience, at the cost of eliminating players from the game.

Other games avoid this, compromising some aspect of the game (such as player-capacity or the rising tension that comes with a shrinking town).

Witchhunt has the best of both options!

Players are still killed off one-by-one as both teams race to eliminate each other, and every round grows more intense.

However, dead Villagers become Angels and continue to influence the game by protecting those still alive.

Meanwhile, dead Witches become Demons with a few tricks of their own...

Dead players are no afterthought; they wield massive influence and can be as much of a factor in winning the game for their team as the living!

(However, because the Angels and Demons act as groups, it's also okay for some to leave.)

SPECIAL ABILITES (FOR ALL)

In some social deduction games, certain players get special roles or abilities.

These can make the game more interesting, but they are often complicated.

It can also leave the majority of players (who don't get anything) feeling left out.

In WitchHunt, every player has a unique character with a simple special ability.

This works because every player gets two random cards: One for their team, and one for their character.

This also means someone like the Survivalist (who has an extra life) could be either a Villager or a Witch.

Because every character is balanced and useful for both teams, every possible combination makes for a unique game.