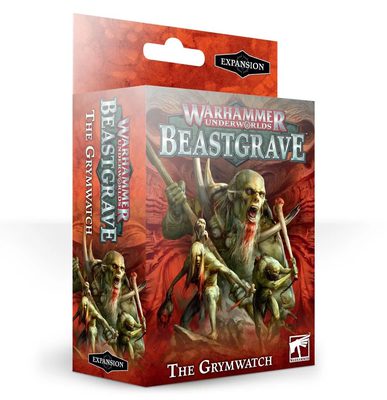 Hailing from a blasted and ruined kingdom far to the north, the Grymwatch have come questing to slay the monstrous entity that they believe lurks at Beastgrave’s heart. The Ghouls of the Grymwatch scramble through the tunnels, noble hunters in search of their monstrous prey.

This warband expansion set allows you to add the Grymwatch to your games of Warhammer Underworlds. A set of push fit models in coloured plastic allows you to get your warband built and ready for gaming in mere minutes, while fighter cards let you keep track of them in game. You’ll be able to harness the unique tactics of the Grymwatch with 32 warband specific cards, including objectives, upgrades and ploys. Meanwhile, 27 Universal cards give you new options for customising your deck whichever warband you play.

59 unique cards to enhance your fighters and provide new tactics and challenges for your games of Warhammer Underworlds: Beastgrave. Including: