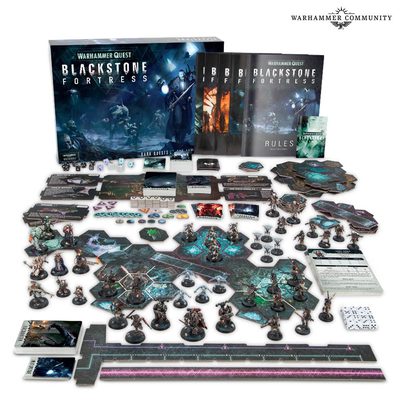 Warhammer Quest: Blackstone Fortress is an adventure game that puts you in the heart of an unfolding mystery in the 41st Millennium. Working with your friends, you’ll use your wits to battle right to the heart of an ancient citadel, pursuing hidden agendas and attempting to discover its secrets. Using an innovative system of procedural generation, no two adventures will be the same, with new layouts, enemies and more in every play through.

In Warhammer Quest: Blackstone Fortress, you’ll pick an explorer and embark on adventures – either solo or with your friends – accommodating 1-5 players per game. Your character will grow, develop and pick up new gear between runs, with each journey offering greater rewards – and greater dangers.

The game has been designed to be fast-paced, tactical and fun. Encounters are as much about wit and cunning as they are sheer force, with each hero offering unique abilities and challenges. Will you snipe your foes at range? Charge in as a living bulwark? Or support the rest of your party? The system is easy to pick up but offers huge depth for those looking to master it.

Blackstone Fortress has allowed our writers and miniatures team to explore never-seen-before avenues of the world of Warhammer 40,000, bringing to life figures who will be iconic to fans of the lore but might not have been seen on a battlefield. Each of the heroes in Blackstone Fortress is a unique and distinct character. Maybe you’ll choose to plumb the depths of the labyrinth as Imperial Navigator Espern Locarno, or spread the Imperial Cult at the mouth of a flamer with Missionary Zealot Pious Vorne. Each of these characters bears secrets, and there are more than a few surprises in store for even the most versed loremasters to uncover…