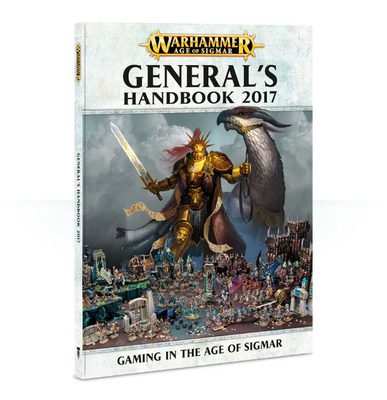 Revised and updated with new ways to play and gaming tweaks based on feedback from the Warhammer community, this is the best way to get bang-up-to-date with Warhammer Age of Sigmar, however you like to play.

Each of these gives you, the player, massive flexibility and choice in the way games are played – they’re designed to make you and your friends masters of your own gaming tables. The different rules have massive scope for overlap; for example if you want to use the multiplayer rules for a tournament, or Matched Play rules for a narrative campaign, you’re totally free to do so.

This is the best introduction to Warhammer Age of Sigmar and the wider world of wargaming in general. Open Play allows you to play unrestricted, even team-based and multiplayer games – all you need is your miniatures, their Warscrolls, the Warhammer Age of Sigmar rules, some dice and a tape measure. The General’s Handbook features different play styles for use with Open Play – Coalition of Death, which allows multiple players to forge alliances with an optional Game Master to watch over the ensuing carnage; Fog of War and Divine Intervention rules; and Triumph & Treachery, an every man for himself melee of 3 or more players with bribes, treacherous acts and secret objectives adding spice to your games. There are 6 different battleplans for each of these.

The stories from the Mortal Realms are an important part of Warhammer Age of Sigmar – your collection of miniatures is made even more special by the rich history and thrilling tales told about them in various publications, making the hobby of collecting them an even more exciting venture. Narrative Play gives you a way to recreate the epic battles that have taken place in the Mortal Realms. The General’s Handbook shows you how to theme an army for Narrative Play, contains advice on where to find the inspirational stories that fuel the games – and how to build your own stories and play exciting games within them.

This section of the book contains Time of War rules for playing Narrative battles in each of the Mortal Realms, with wildly differing play styles appropriate to their environments, with 6 battleplans. It also includes Siege Warfare – detailed rules for battles in which one player must assault the other’s stronghold, which introduces the Siege Phase. In this, the attacker can smash against the stronghold, tunnel beneath it or simply starve out their foe, who can gather supplies and counter-attack in turn; 2 battleplans for this are included.

Some hobbyists prefer to test their mettle in an equally-matched battle of strategy and wits, in which no advantage is conferred simply by selecting the biggest and baddest miniature in your figure case. Matched Play is the perfect solution – this provides points values for the units available in the Warhammer Age of Sigmar range, allowing you and your opponent to size each other up, decide on a points limit, deploy your armies and go to war on an equal footing.

Balanced armies of course mean that there will be gamers itching to prove themselves in tournaments, and the Pitched Battle rules are expressly designed to get armies matched up and onto the table with a minimum of fuss. Does your gaming group have the whole night to play, or is time of the essence? This book has suggestions and recommendations for various sizes of gameplay an epic battle that takes a whole night, skirmish for an hour, or anything in between. Also included are rules for Ladder Campaigns – the General’s Handbook will make setting up and maintaining tournaments easy.

Pitched Battle profiles for each Warscroll and Warscroll Battalion from Battletomes and Grand Alliance books available in the range at time of printing, updated following feedback from the Warhammer community – these are designed to overwrite any published prior to August 2017.