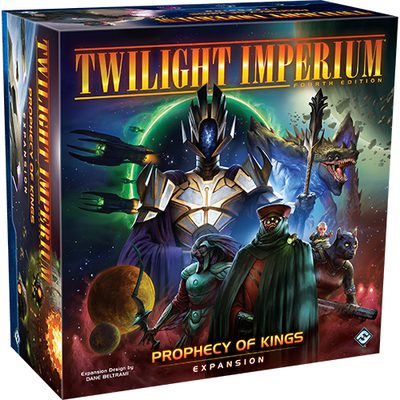 The lost planet of Ixth, fabled paradise of a million dreamers, promised land of a thousand faiths, a legend as old as the Lazax, has been found. Unfortunately, the old tales of Ixth are nothing more than lies, and when an exploratory expedition ventures through a sealed wormhole in Creuss space, they discover a tomb-city outside the galaxy. This city is a prison, constructed for one purpose: to imprison the Mahact Gene-Sorcerers, tyrannical kings of the galaxy before the Lazax ever rose to power. And now that they have reawakened, no power can compel the Mahact to stop their burgeoning conquest.

This massive expansion is packed to bursting with new content that you can add to your games of Twilight Imperium. The galaxy has grown far larger, as seven never-before-seen factions enter the game, each boasting their own unique strengths and weaknesses, from the gene-altering powers of the Mahact, to the watchful guard of the Argent Flight, to the mysterious and ancient Empyrean. And new factions aren’t the only way the galaxy grows bigger! Forty new system and hyperlane tiles add new planets and obstacles to the map, and with two new colors of player components included in the Prophecy of Kings expansion, you can play Twilight Imperium with up to eight players.