The Lord of the Rings: Journeys in Middle-Earth - Shadowed Paths Expansion (PREORDER) 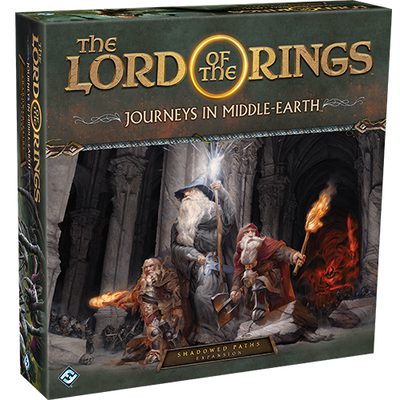 A new menace stirs in Mirkwood. Rumors of gigantic spiders infesting the forest have drawn you to visit the realm of the Woodland King, but who knows what you might find there, lurking around the next corner, shaded under thick, rustling boughs?

Fantasy Flight Games is happy to announce the Shadowed Paths expansion for The Lord of the Rings: Journeys in Middle-earth!

Calling you east of the Misty Mountains, this expansion unlocks an all-new campaign with thirteen scenarios that take you from the tangled paths of Mirkwood deep into the shadowed halls of abandoned Moria. At the same time, Shadowed Paths adds five heroes, 25 enemy miniatures and 20 journey map tiles as well as new terrain, items, and titles to all of your adventures in Middle-earth!

Will you heed the call? Gather your friends, prepare your heroes, and brave the terrors of Shadowed Paths!