Sylvaneth The Lady of Vines 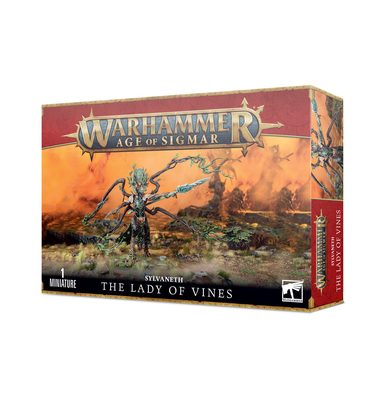 The Lady of Vines is the literal hand of Alarielle, cut from the goddess’s wrist and grown into a towering war leader. She holds true to the Everqueen's summery war-aspect even in times of wintery melancholy, her song of wrath echoing through the very realmroots, and has slain countless foes of the Sylvaneth with her lashing whip-limbs and her holy spear, Kurnotheal’s Wrath. Even when she is cut down, the Lady of Vines is regrown anew to punish the enemies of Ghyran - as inevitable as the turning of the seasons.

This multipart plastic kit builds the Lady of Vines, one of the Sylvaneth's mightiest warrior-generals, and daughter of Alarielle herself. Clad in elegantly filigreed armour and a skirt of living foliage, this demigoddess dryad strikes a regal figure, her head adorned by the Verdian Crown. The Lady of Vines strikes at enemies with whip-like vines and her blessed spear, Kurnotheal's Wrath, this demigoddess dryad draws upon the power of the Everqueen to cast vital magics and do her mother's divine bidding.

This kit comprises 21 plastic components, and is supplied with a Citadel 80mm Round Base. This miniature is supplied unpainted and requires assembly - we recommend using Citadel Plastic Glue and Citadel Colour paints.