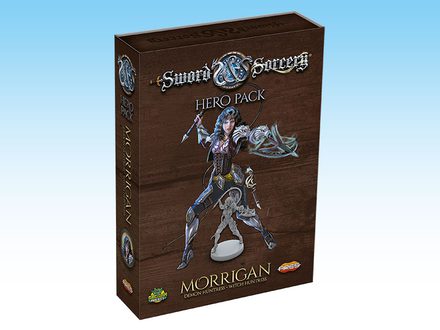 The world of Sword & Sorcery® always needs new heroes! With this Hero Pack, you now have the possibility to introduce a new, powerful character into your campaign.

There are times when terrible acts give birth to an implacable nemesis, creating heroes completely devoted to revenge… Heroes like Morrigan, who saw her parents and friends exterminated by supernatural creatures.

This Hero Pack features two miniatures of Morrigan (normal and Ghost Soul form), her Soul Gem, and new cards — including two legendary treasures, the Moon Scythe and the Inferno’s Tongue.