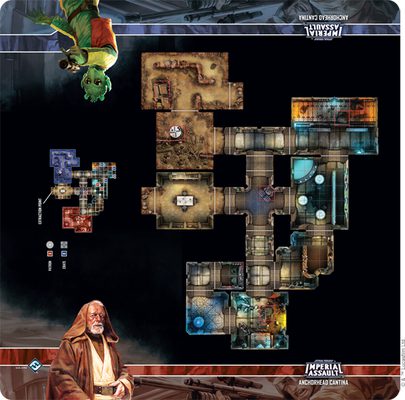 Note: to make the shipping of this product easier we will open it from its orginal carbon box. If you want the product unopened leave us as a message not to open it.

“Look, I can take you as far as Anchorhead. You can get a transport there to Mos Eisley or wherever you're going.”

Far from the galaxy’s bright center, on the Outer Rim planet of Tatooine, you’ll find the unremarkable town of Anchorhead. The planet is far from Imperial oversight, but rather than relegating it to becoming a worthless backwater world, this lack of control has only made Tatooine more appealing to crime lords like Jabba the Hutt. Now, an unassuming cantina may be home to your vicious firefights—the Anchorhead Cantina Skirmish Map for Imperial Assault is now available for order at your local retailer!

The Anchorhead Cantina Skirmish Map is now entering the tournament rotation for Imperial Assault, and this neoprene playmat offers the perfect play surface, showing the tangled hallways and common rooms of the cantina, along with the junkyard outside. Measuring 26” by 26”, this playmat features the entire map printed directly onto its surface, ensuring that your setup never takes more than seconds.

As you play, there’s plenty of room around the borders of the playmat for you to set up your Deployment cards and tokens, as well as handy references for each team’s starting setup zones. You’ll even find additional copies of the Anchorhead Cantina Skirmish cards included with this playmat, giving you everything you need for the definitive Imperial Assault skirmish experience.

Finally, this playmat draws you and your opponent deeper into the Star Wars universe with evocative artwork of two characters who called Tatooine home. On one side, you’ll find the relentless Bounty Hunter Greedo, eager to earn a reputation as a fearless hunter. Across from him, you can see the old Jedi Knight, Obi-Wan Kenobi, now emerging from his self-imposed exile to aid the fledgling Rebel Alliance.

There’s no better way to battle your opponent during a game of Imperial Assault than with the easy setup of a playmat like the Anchorhead Cantina Skirmish Map. Whether you’re preparing for the 2017 Imperial Assault World Championships in May, or just playing at your kitchen table, this is the Skirmish Map you’ve been looking for. Order your copy at your local retailer today!