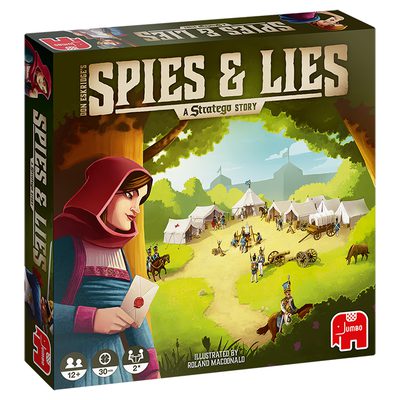 Break the deadlock in the final days of war. Victory will hinge on the actions of a handful of men – and we women spies… Go head-to-head as you secretly select soldiers with different abilities to engage the enemy.

Each of you will have the opportunity to sabotage your opponent’s missions – using careful deployment, clever deduction and surprising deception. With every enemy soldier you identify, with every advance you rebuff, you’ll tighten the noose, infiltrating further into the enemy camp and taking the Double Agent a step closer to capturing the enemy flag!

Spies & Lies is played in 3 rounds. Each round consists of 3 phases:

1. Deployment: each player places one Soldier card from your hand face down below each of your 4 Mission cards. Your soldiers’ ranks (1-10) must always increase from left to right, with the exception of the Sergeant (4) who can be placed in any position (to surprise the enemy and make deduction more difficult).

2. Intelligence: turn over the intel card. Each player must now place an Intel token on each of their Mission cards that corresponds to a Soldier whose rank number is shown on the Intel card, with the exception of the Sergeant.

As soon as your Infiltration marker reaches 10 on the track, you have successfully infiltrated the enemy and can move the Double Agent towards the enemy flag. The first player to land on the enemy’s flag with the Double Agent wins (or the player who is closest to doing so when the third round ends).

The head-to-head game of deployment, deduction and deception by Don Eskridge with illustrations by Roland MacDonald.