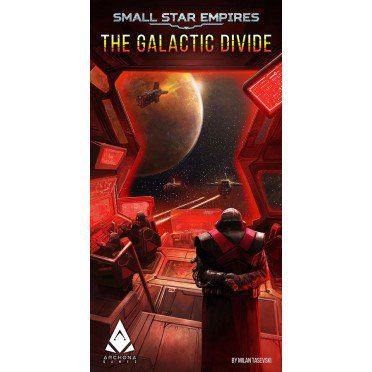 After decades of colonization, the spacefaring races have finally come to the moment where even their own colonized space is not enough. Tensions are rising as each civilization tries to force its agenda upon the crowded galaxy and fortify its position.

When using Small Star Empires: The Galactic Divide, at the beginning of the game you choose which civilization to play with and take its corresponding civilization board. Each civilization board has unique abilities that cost certain amounts of power to play, and a track on which you mark the amount of power you have available. To increase your power, you must build massive battle stations on strategic locations adjacent to other players. Battle stations also protect your adjacent systems, disabling the other players from using special abilities on your territories.

Will you accept planets into your Tollaran Republic to build a mighty galactic federation, conquer the galaxy under your Hantal'ar Empire, unite the planets under Ora'Nor, or buy the most powerful galactic corporations as the Pern Conglomerate?