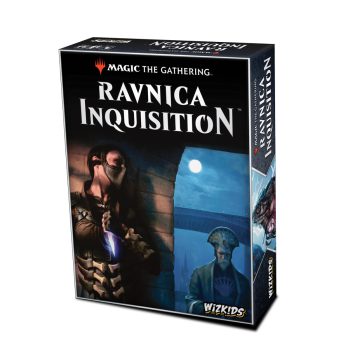 Players will elect leaders for each of the 5 colors, but only players whose guild’s color pair contains the color may be voted for. Each color leader has a special power they can use to further their goals, so players must be careful when voting, lest Nicol Bolas’ influence grow. Once all the color leaders have been elected, a vote is held to eliminate 1 player. Once the dust has settled, players will reveal their roles, and if the Agents of Bolas were eliminated, the Gatewatch wins!

A social deduction game for 5-10 players, Ravnica: Inquisition is sure to become a fast favorite of party game fans and Magic: The Gatheringenthusiasts alike!