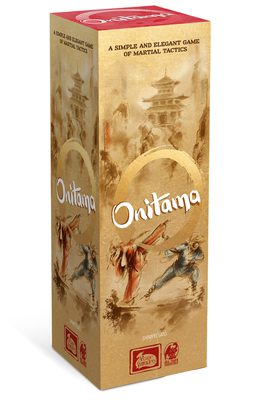 Onitama is a two player abstract strategy game where players take on the role of a Master, guiding their monk followers, attempting to defeat your opponent armed only with a handful of moves, your cunning and your wits!

In Onitama, players will vie to capture their opponent’s Master, or, traverse their Master across the board to their opponent’s Master’s starting position to win the game. To do this, you will be armed with a handful of special and ancient maneuvers, presented on beautiful Tarot size cards, that manipulate the field of battle to your advantage. Will you use the Dragon to overpower your opponent, the Horse to outmaneuver them, or the Cobra to strike quickly?

These special moves are not yours alone though. In Onitama, players will shuffle the deck of moves, dealing two moves to each player to begin a game. In addition, a 5th will be placed face up, to the side of the board. When it is your turn, you may choose to move any piece using your cards, however, the card you choose to use will then be exchanged with the card to the side of the board. This means your opponent will have access to that move, after their next! Can you out-think, out-maneuver, and out-wit your opponent?