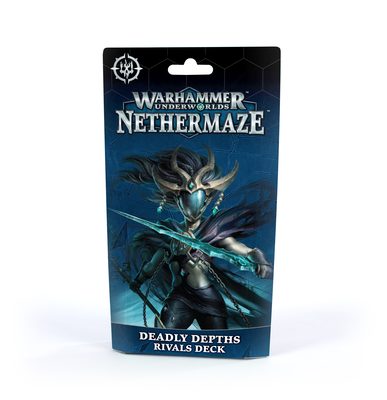 Get stuck into Warhammer Underworlds with a full Rivals deck, usable by any warband – including those from past seasons with no Rivals deck of their own. These cards are usable as a standalone deck in Rivals games, but can also be used to enhance an existing deck. Each card is brand new to the game, creating a cunning deck that uses Gloom and Feature tokens to outwit the opponent, enabling both aggression and control. This deck features mechanics introduced throughout the Harrowdeep season, such as Maps, Illusions, and Denizens, making it especially suited to the Shadeborn, Skittershank's Clawpack, and Hexbane's Hunters warbands.

The Rivals format is designed to be the most accessible way to play Warhammer Underworlds, as player face off using pre-made decks in a test of pure skill. Rules for the Rivals format can be found on the Warhammer Community website.

You'll need a copy of the latest Warhammer Underworlds core rules to use the contents of this deck.