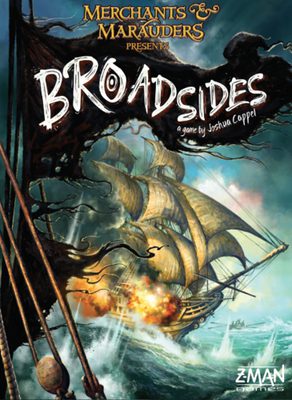 XVII century, Caribbean Sea. At the helm of your mighty vessel, you scour the horizon with your spyglass. Profitable sea lanes are just waiting to be claimed… But a rival ship is fast approaching your prize! Can you sink them before they send you swimming?

Merchants & Marauders: Broadsides brings you back to the golden age of piracy with this 2-player game where you and your opponent are engaged in a deadly battle hoping to sink each other’s ship. Load your cannons, aim, and unload everything you’ve got at the enemy!

Set in the Merchants & Marauders univers, this new entry is far from the pick-up and deliver adventure that was its predecessor. Instead, M&M:B is a hand management, worker placement, combat game where a hand of cards will let you eather load your canons, or aim them at your opponent's rigging, hull, or deck, among other actions of a given phase.

Those other actions include reloading said canons, engaging a broadside, and even forcing your opponent to discard some of their own cards with a Sheer Off action. All of these actions can be done by discarding combos of cards such as a pair, a straight, or a flush.
You can only pick two of these per turn though, and there's no guarantee that the cards you need to aim properly will come back any time soon! What action you choose, and when you choose them could make or break your game at any turn.