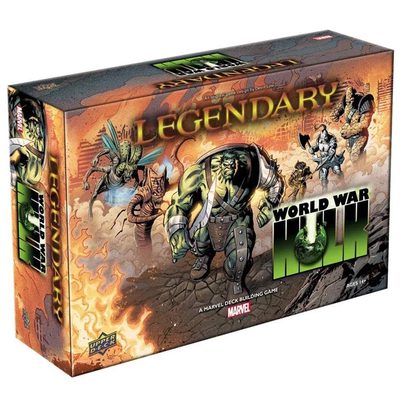 Legendary: World War Hulk, the 16th expansion for Legendary: A Marvel Deck Building Game, puts the spotlight squarely on the "Planet Hulk" and "World War Hulk" storylines from Marvel Comics. This set brings to the game many Marvel characters that have been overlooked since the inception of the Legendary game.

This big box expansion has Marvel's biggest characters, including Sentry, Hulk (both Bruce Banner and Amadeus Cho), and She-Hulk! It brings the new Warbound team faction to the forefront with plenty of new characters and some of the most exciting and challenging Masterminds and Schemes yet!

This will be the biggest Legendary expansion to date with four hundred cards of new Heroes, Masterminds, Villains, and Schemes straight from the Hulk lore.