Lord of the Rings LCG: The Hills of Emyn Muil Adventure Pack 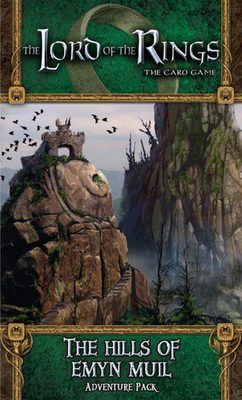 Gollum’s trail has led the heroes south to the hills of Emyn Muil, but then it grew cold. Now, the heroes must explore this vast expanse of Middle-earth wilderness, in the hopes of rediscovering the trail and following it wherever the elusive creature has fled…

The Hills of Emyn Muil is the fourth Adventure Pack in the Shadows of Mirkwood cycle for The Lord of the Rings: The Card Game! The hunt for Gollum continues in this exciting expansion, which includes a Quest card and its related Encounters, plus new Hero, Attachment, and Ally cards!

Having lost Gollum’s trail at the Carrock, then embarked on a mission of mercy to Rhosgobel, the heroes now come to the hills of Emyn Muil, where they have only one objective: to find Gollum. This engaging Adventure Pack contains the first ever single-card quest, in which players must gather victory points by exploring a wide range of locations. Can you scour Emyn Muil and determine Gollum’s whereabouts before it’s too late? With 60 new cards for The Lord of the Rings: The Card Game, The Hills of Emyn Muil will augment existing decks while providing players with entirely new challenges for their heroes.

This is not a stand-alone deck. A copy of The Lord of the Rings: The Core Set is required to play.