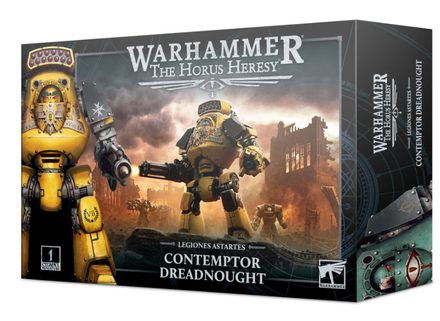 The hulking Contemptor Dreadnought is an iconic unit for Space Marines in the Age of Darkness, and with good reason. This adaptable war machine can be armed to complement any playstyle – like to stand off and shoot? It can do that. Would you rather get up close and personal? No worries. Prefer a mix of both? The Contemptor has you covered.

The kit includes eight different guns and a pair of fists – and you’ll be able to pre-order the weapon frames separately, allowing you to double-up on the same weapon to assemble a specialist Dreadnought. One sprue contains an extra autocannon, bolt cannon, lascannon, and melta cannon, along with a spare fist and an extra pair of arms.

Either way, you’ll have all sorts of bits left over to equip even more Dreadnoughts!