Lord of the Rings LCG: Race Across Harad Adventure Pack 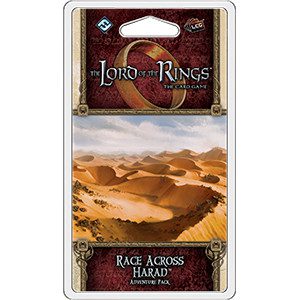 "Where the warg howls, there also the orc prowls."

–Aragorn, The Fellowship of the Ring

Race Across Harad is the second Adventure Pack in the Haradrim cycle for The Lord of the Rings: The Card Game.

After a small band of Middle-earth’s greatest heroes capture and tame some oliphaunts to help carry them out of Harad, the new scenario in Race Across Harad pits them against the pack of wargs and their riders who arrive hard upon their heels. Even while their towering oliphaunts may give the heroes an early advantage, the heroes know they cannot ignore the warg-riders and their barbed arrows. Instead, their only hope is to quicken their pace and ride for the Ford of Harnen where their massive oliphaunts might be able to crash through waters too deep for the wargs to cross…

Meanwhile, even as the scenario from Race Across Harad brings this frantic chase to life, it enhances your deck-building options with a new Dúnedain hero, plus three copies each of nine different player cards. These enhance a wide range of the game's existing keywords, Traits, and mechanics. You'll find support for everything from Mounts to side quests and from the Doomed keyword to the cycle's new focus on events that offer powerful rewards when you can target specific pairs of Traits.

This is not a standalone product. Requires a copy of The Lord of the Rings: The Card Game Core Set and The Sands of Harad deluxe expansion to play.