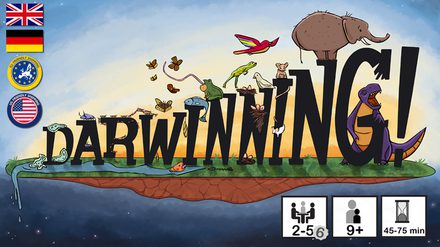 A novel trick-taking game for 2-6 players

Darwinning! challenges serious gamers, but also charms children and plays especially well as a family game. In Darwinning!, species are evolved by building your tableau. See if you can evolve your species through the four eras the best.

Darwinning! has been played with children from 8 year old and up. One needs to be able to recognize numbers up to 15 and remember a few symbols, or alternatively the 15 card effects. The game components do not have written text.

Players can build their animal's tableau with unique traits, grow their population, move up on on the food chain or adapt to different environments by winning tricks. The game is played over three eras (rounds). After the third era, the most successful species wins.