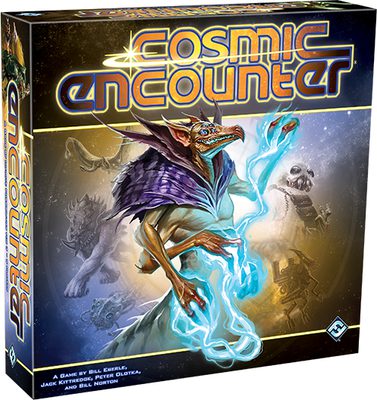 Who—or what—is out there?

Eons ago, your ancestors searched the black void of space for intelligent life. Their search proved fruitless. They were alone. Desolate, they used their technology to send the seeds of life to inhabitable planets across the galaxies. Over millions of years, the alien species evolved, but before the ancestors could see the fruits of their labor, they disappeared.

To aid their children, your ancestors left behind a legacy of advanced technology and hyperspace gates- gifts to encourage communication and harmony between their children. But without the guide of an elder, you and your distant alien cousins must learn to communicate, negotiate, and coexist.

Welcome to the Cosmic Age. The open skies of countless worlds are filled with speeding spaceships, and a panoply of alien species compete to populate the galaxy. Will your people choose to occupy undefended worlds, create peaceful civilizations, or ruthlessly conquer foreign planets? In the quest to colonize the vast cosmos, there are as many paths to victory as there are aliens seeking it. Peace, war, negotiation, betrayal—you never know what will happen in the nextCosmic Encounter!

This classic game of alien politics returns from the warp once more.  In Cosmic Encounter, each player is the leader of an alien race. On a player's turn, they become the offense. The offense encounters another player on a planet by moving a group of his or her ships through the hyperspace gate to that planet. The offense draws from the destiny deck which contains colors, wilds and specials. The player then takes the hyperspace gate and points at one planet in the system indicated by the drawn destiny card. The offense vs. the defenses ships are in the encounter and both sides are able to invite allies, play an encounter card as well as special cards to try and tip the encounter in their favor.

The object of the game is to establish colonies in other players' planetary systems. Players take turns trying to establish colonies. The winner(s) are the first player(s) to have five colonies on any planets outside his or her home system. A player does not need to have colonies in all of the systems, just colonies on five planets outside his or her home system. These colonies may all be in one system or scattered over multiple systems. The players must use force, cunning, and diplomacy to ensure their victory.

Players choose from dozens of alien races, each with its own unique power to further its efforts to build an empire that spans the galaxy.  Many classic aliens from earlier editions of this beloved game return, such as the Oracle, the Loser, and the Clone. Newly discovered aliens also join the fray, including Remora, Mite, and Tick-Tock. As you build your galactic empire in the depths of space, the other alien races of the Cosmos will be vying against you for control of the universe. Alliances will form and shift from moment to moment, and cataclysmic battles will send starships screaming into the warp!