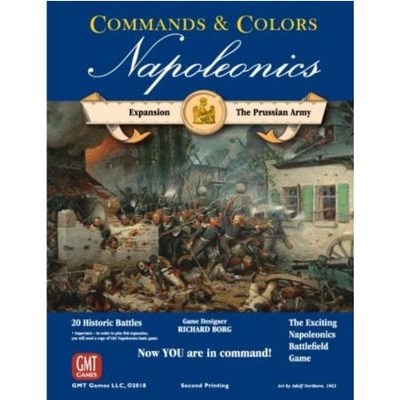 In 1806 Napoleon crushed the fearsome Prussian military machine. The humiliation of military defeat forced the Prussian kinginto much-needed military reform. The new Prussian army that emerged became one of the finest in Europe., due in part to the organizational genius of Scharnhorst and Gneisenau and in part due to Field-Marshal Prince Blücher, who drove his regiments to fight with relentless vigor.

In 1813 Prussia rejoined the war against Napoleonic France and the Prussian army under Blücher, although sometimes playing second fiddle to Austria, Russia and Great Britain, was a major force in bringing an end to Napoleon Bonaparte's rule.

The Prussians played a major part in Napoleon’s defeat at Waterloos. Prussia’s reward was the recovery of her lost territories, as well as the whole of the Rhineland and Westphalia. Prussia therefore emerged from the Napoleonic Wars as the dominant power in Germany.

In this expansion you will find 18 historical scenarios that focus on the Prussian Army battles from 1806 to 1815 against Napoleon, plus all the new units you’ll need to field for these engagements.

• No component changes to any of the expansions

• Each army has differing strengths and weaknesses versus the French army.