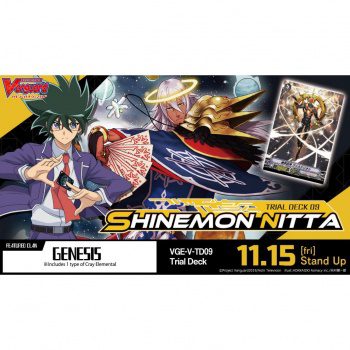 Featuring a Trial Deck for 《Genesis》 used by the new protagonist, "Shinemon Nitta"!!

The clan type is "Force"!

Introducing the very first Grade 5 unit in the history of Vanguard! Not to mention the new ability to call that unit, "Astral Plane"!

1 each of "Gleaming Lord, Uranus", "Giant Deity of Distant World, Valkerion", and "Prometheus of Dancing Lights" together with a random card will come with RRR treatment.

(1 out of the remaining 13 types excluding "Goddess of Self-sacrifice, Kushinada")

All Reissue Cards featured in the infosheet!

A "Giant Deity of Distant World, Valkerion" with special treatment will be randomly included as well!