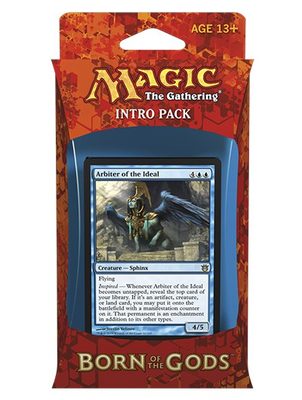 Inspiration-Struck is a blue/black intro pack centering around the Inspired mechanic.

Creatures with the inspired mechanic have abilities that trigger when they become untapped, offering great rewards to anyone willing to find creative ways to tap and untap them.

There are plenty of benefits you can get from creatures with inspired. Deepwater Hypnotist can give a creature -3/-0 to make that creature a less effective blocker, allowing you to continue your assault. Aerie Worshippersand Forlorn Pseudamma will overwhelm your opponent with token creatures if the game goes long enough. If you can untap Arbiter of the Ideal, you'll be able to look at the top card of your library—and if it's an artifact, creature, or land, you can put it onto the battlefield for free.

Untapping is an integral part of Magic, so there are plenty of directions to go when you're looking for cards to add. The Born of the Gods card Claim of Erebos is an Aura that grants one of your creatures a powerful Tap ability. Thassa, God of the Sea from the Theros set has an activated ability that keeps your creatures from being blocked, letting you keep up the assault.