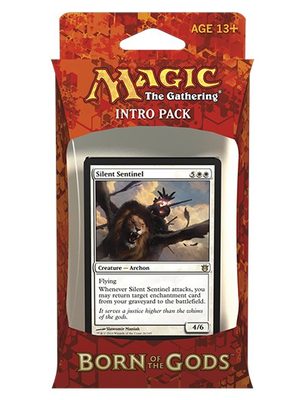 With the "Gifts of the Gods" deck, use your versatile enchantment creatures to either deploy a large force or power up one mighty creature to topple your opponents.

Bestow is an ability found on some enchantment creatures that allows you to cast the card it's on as either a creature or an Aura. If the creature it's enchanting leaves the battlefield, an Aura with bestow turns into a creature instead of going to your graveyard. Bestow allows you to build up multiple different abilities on one creature, and some combinations are deadly effective. Thassa's Emissary and Flitterstep Eidolon, for example, will allow you to make an unblockable creature that draws you a card each time it deals combat damage to your opponent.

Building up lots of abilities on a single creature is a great path to victory. Fiendslayer Paladin from the Magic 2014 set comes with first strike and lifelink, so it's a great choice if you're looking for a creature to enchant.

If you're looking for more bestow creatures, it's hard to get better than Eidolon of Countless Battles from the Born of the Gods set. Its power and toughness—and the power and toughness bonuses it grants to the creature it enchants—are each equal to the number of creatures and Auras you control, which is usually going to be a big number!