Born of the Gods Intro Pack: Forged in Battle 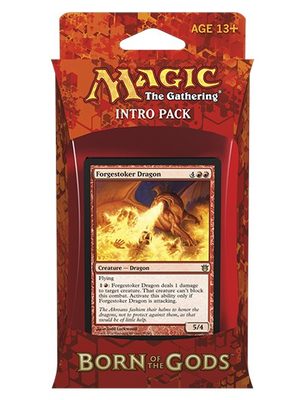 Forged in Battle is a red/white intro pack and the second one centering around the Heroic mechanic.

Crash through your opponent's defenses with a combination of heroic creatures, powerful Auras, and instants that enhance your creatures in combat.

A creature with the heroic mechanic gets extra benefits whenever you cast a spell that targets it, whether that spell is an instant, a sorcery, or an Aura. If your opponent has blockers getting in your way, you can tap them withElite Skirmisher or, better yet, use Akroan Conscriptor to steal one for a turn and add them to your attacking force.

Naturally, you need something to target your creatures with to get them going. Fall of the Hammer lets you target one of your own creatures and have it deal damage equal to its power to another creature—and that includes any +1/+1 counters it gets from its heroic trigger. Dauntless Onslaught and Coordinated Assault are both great ways to completely turn the tides of combat, each allowing you to target multiple creatures.

If you're looking for more heroic creatures, Fabled Hero from the Theros set is a powerful option. Its double strike ability doubles the effect of any power-pumping you have. Anax and Cymede is another great heroic creature if you like building up an army. Its heroic trigger gives your entire team +1/+1 and trample. If you're looking for more ways to target your creatures, Shiv's Embrace from the Magic 2014 core set lets you grant one of your creatures the strength, flight, and fiery breath of a dragon.