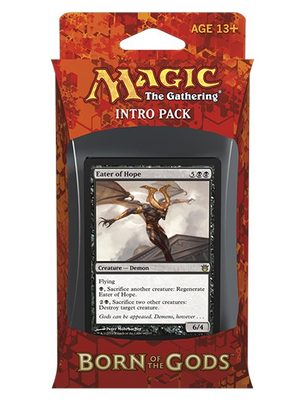 Death's Beginning is a green/black intro pack centering around the graveyard.

The "Death's Beginning" deck focuses on building up a massive graveyard and playing creatures that grow stronger based on the size of your graveyard. Whether it's Commune with the Gods filling your graveyard and helping you find giant monsters or Nighthowler growing larger for each creature in either graveyard, this deck has no shortage of powerful punches. Eater of Hope gives you yet another way to fill both graveyards: by sacrificing your own creatures to destroy your opponent's forces. Even something as fundamental as trading your creatures for your opponent's in combat is an effective way to get more cards in both graveyards and prolong the game.

There are more things to do with a big graveyard than just power up your creatures. Pharika's Mender and March of the Returned will both let you pick and choose which creatures to bring back from your graveyard for an encore performance. The Mender will even let you return enchantments like Weight of the Underworld, which can destroy a second creature. With the right series of plays, Rescue from the Underworld can put the mighty Eater of Hope onto the battlefield earlier than you would normally be able to cast it.

If you want more ways to cast your large creatures quickly, Elvish Mystic from the Magic 2014 core set is a great way to get ahead on mana. If another creature that benefits from filling up graveyards is what you need,Champion of Stray Souls from the Born of the Gods set lets you sacrifice creatures to return your best creatures from your graveyard to the battlefield.