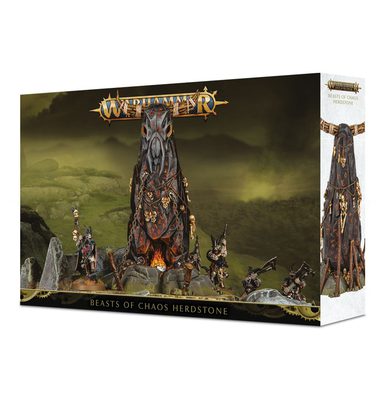 Wherever the Beasts of Chaos roam, they erect enormous megaliths called Herdstones. Wrought from the warp-infused substance of the realm in which they stand, Herdstones mark a beastherd’s territory and serve as the focal point for their anarchic bacchanals. A fusion of nature and Chaos, they spread a malign influence, crumbling the trappings of civilisation to dust and inspiring the Beasts of Chaos to fight with increased, unfailing vigour.

This multi-part plastic kit contains the components necessary to assemble a Herdstone. This scenery piece acts as a ritual megalith, imbuing nearby Beasts of Chaos with extra fury and rage. It is depicted as a tall rock, with beastlike faces and runes carved into the sides, skulls and bones lashed around with rope and an enormous, graven animal skull dominating the top of the structure, with large horns made from scavenged wood finishing the whole Herdstone off. At its base is a pile of skulls, which have been ignited; strewn around those are a variety of looted weapons, armour, trinkets and yet more skulls, the prizes of the Beasts of Chaos’ grisly excursions. 2 chains tether the Herdstone to the ground in front, with wooden stakes at the back providing stability.

Rules for using this scenery piece as part of your Beasts of Chaos army are included as a Warscroll in the box, and are also found in Battletome: Beasts of Chaos.