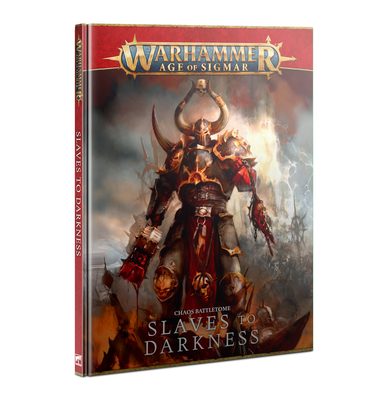 The Slaves to Darkness pursue power at any cost. They’ve sold their souls to the Dark Gods in order to forge a path to supremacy, and their ill-gotten strength makes them a terrifying force indeed. Ironclad champions and diabolical sorcerers lead warbands of madmen, mutants, and monsters to savage every foe they encounter, offering each death as tribute to their fickle and demanding masters. In turn they are richly rewarded, though the gifts bestowed by the gods are not always what was asked for…

This book is a must-have for every general who wants to conquer the Mortal Realms with the Slaves to Darkness. Not only will you find a rich history and background extolling the dark virtues of these most heinous warriors, and macabre art to inspire you, you’ll also find everything you need to play them in your games of Warhammer Age of Sigmar.

– Lore and history of the Slaves to Darkness, their conquests, heroes, and background about the Gods of Chaos whom they worship

– Allegiance Abilities, battle traits, and enhancements including 8 command traits, 9 artefacts of power, 5 Lore of the Damned spells, and 6 Ensorcelled Banners

– Rules for 6 distinct Damned Legions – Host of the Everchosen, Legion of the First Prince, Cabalists, Despoilers, Ravagers, and Knights of the Empty Throne

– Path to Glory rules for your taking your malicious horde on a campaign of terror, as your Heroes attempt to gain the eye of the Dark Gods, achieving apotheosis or damnation for their efforts

This battletome contains a one-use code to add the book to your digital library in Warhammer Age of Sigmar: The App.