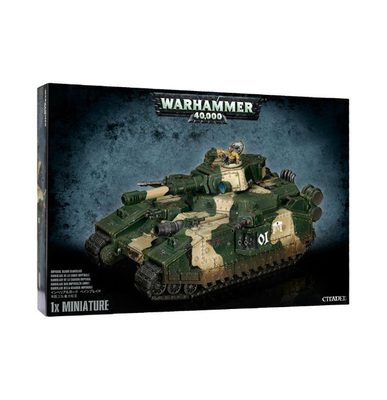 The biggest battle tank in the Imperial arsenal, the Baneblade is the super-heavy of choice for the discerning Imperial General. This is the ideal centrepiece model for any Imperial Guard collector.

This model kit allows you to make the Baneblade tank as described in the Apocalypse rulebook. The sponsons are armed with twin-linked heavy bolters, and the turret is equipped with infantry shredding Baneblade Cannon. A Demolisher cannon is included as the secondary gun because, let’s face it, there is no such thing as too many weapons.

Aerials, artillery shells, smoke launchers, searchlights, tools, name plates, pintle-mounted heavy stubbers, and a co-axial autocannon are all available as additional modelling options. On top of this you also get 3 optional turret-mounted crew who come with a variety of heads, arms and weaponry, allowing you to make an officer, driver or gunner (of course you can always glue the turret shut should you wish). And finally, there are enough parts for you to make an Imperial Guard officer on foot as well.

This plastic kit contains 295 components (no, that isn’t a typo) to make an Imperial Guard Baneblade. Alternatively, you can also make a Banehammer, Banesword, Doom Hammer, Hellhammer, Shadowsword, Stormlord or Stormsword super-heavy tank using this kit. Also included is 1 Transfer Sheet which can be used to add markings and insignia.