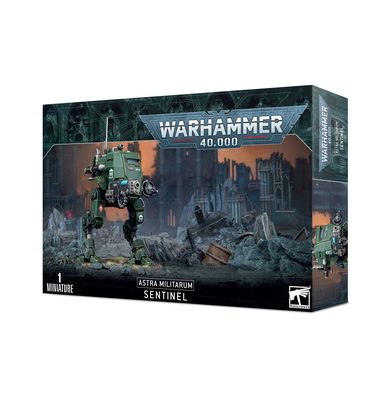 This multipart plastic kit builds one Armoured Sentinel – a light walker toting heavy firepower on an sturdy frame. There are loads of options in the kit, allowing you to arm your Sentinel for any battlefield role with an autocannon, heavy flamer, missile launcher, multi-laser, or plasma cannon. You can additionally equip your walker with a poseable Sentinel chainsaw for more melee punch, and a hunter-killer missile for extra firepower. You'll also find plenty of cosmetic options, including a searchlight and smoke launchers, stowage and spare equipment racks, and extra fuel canisters.

This kit can alternatively build a Scout Sentinel with an open cockpit, which trades durability for extra speed in warzones where mobility is essential.

This kit comprises 91 plastic components and is supplied with 1x Citadel 80mm Round Base. Also included is an Astra Militarum Vehicle Transfer Sheet, with 475 transfers featuring numerals, sigils, and a variety of regimental heraldry. This miniature is supplied unpainted and requires assembly – we recommend using Citadel Plastic Glue and Citadel Colour paints.