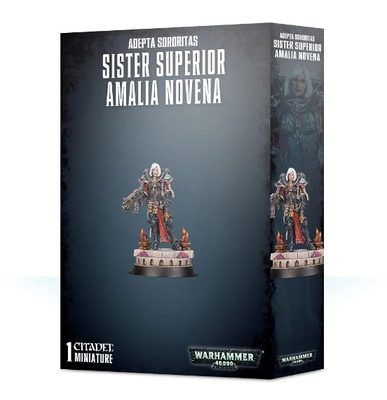 Sisters of Battle make up the vast majority of the Orders Militant of the Adepta Sororitas. Each Battle Sister is an orphan raised from birth by the Schola Progenium to believe in the righteousness of their cause and is trained from an early age in the use of a variety of weaponry. Battle Sister squads are each led by a Sister Superior, such as Amalia Novena, who is a member of the Order of the Martyred Lady.

Based on the iconic Sisters of Battle artwork by Karl Kopinski, and clad in the classic power armour associated with the Adepta Sororitas, Sister Amalia is armed with a Godwyn-De'az pattern bolter. She is posed as if on sentry duty and is supplied with a scenic base representing the Convent Sanctorum on Ophelia VII, which includes the icon of the Order of Our Martyred Lady in the centre of the base.

This kit is supplied in 12 plastic components and comes with a 32mm round base. Also included is an A4 print of the original artwork and a datasheet for a Battle Sisters Squad, featuring the profile for a Sister Superior.