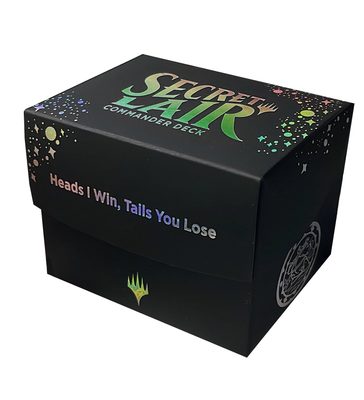 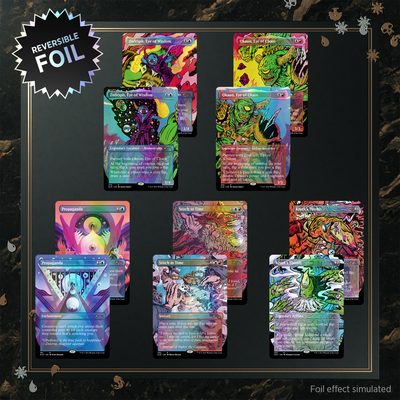 WHAT IN THE HECK IS GOING ON, HERE?

We’re super stoked to introduce Secret Lair’s very first Commander Deck. That’s right, for a limited time you can grab a unique, 100-card deck filled with tons of foils, 10 pieces of killer new art (across five cards, we will explain), and a bunch of other goodies like a unique flippin’ coin and life wheel.

REVERSIBLE CARDS? WHAT IN TARNATION ARE THOSE?

Reversible cards are a cool new piece of Magic tech we’re excited to debut here. It’s a relatively straightforward concept, but it results in some awesome looking cards. These are double-sided cards, but they have the same functional card on each side. However, each side has different art. You can swap which side you want to show off when casting the spell, or just stick with your favorite. You can even flip a coin to pick! It’s just another way you can express yourself when playing the game.

NEAT! WHAT’S THE DECK DO?

This deck is from Gavin Verhey’s secret vault, and it’s a blast to play. Here’s some words from the man himself:

“I've loved Zndrsplt and Okaun ever since I made them in Battlebond—and this Commander deck out of my personal collection puts them center stage! It looks so lovable and innocent... and then by the time you’ve started attacking people for lethal, it’s too late to stop your coin-flipping reign of terror.

“You’ll want to spend the early turns building up your mana rocks and equipment, and playing some silly coin flip cards. Then, start deploying your Commanders! Usually, I suggest starting with Zndrsplt so you can start flipping coins and drawing cards. Your opponents will think it’s so cute and laugh. ‘Look at the funny coin-flip deck! Haha.’

“And that’s when you know you’ve got them. Deploy Okaun—the way this deck normally kills. If you have some equipment, suit him up! You just need to win three coin flips to kill with Okaun using Commander damage—and maybe less with the right equipment. I’ve attacked for over 10,000 damage with a single Okaun before! They’ll try to remove it, but that’s what your counterspells are for. If there are creatures in the way, you can sneak it through with cards that grant unblockability. Or if you really want the table to flip out, use Chandra’s Ignition so your 10,000 power (or similar) Okaun kills the table at once!

“If you have any questions about how the deck plays, you can hit me up on Twitter @gavinverhey. Enjoy!”

One (1) single-use code for two (2) Heads I Win, Tails You Lose Themed Sleeves (may be available later for separate purchase in MTG Arena).