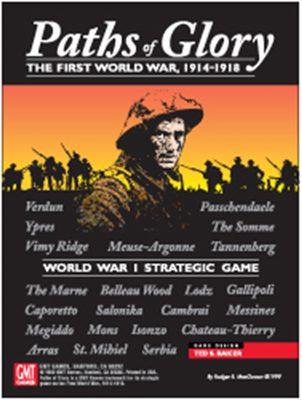 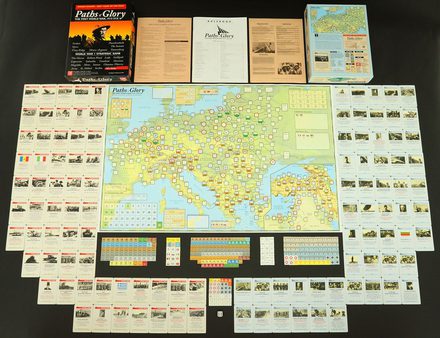 Paths of Glory, designed by six-time Charles S. Roberts Award winner, Ted Raicer, allows players to step into the shoes of the monarchs and marshals who triumphed and bungled from 1914 to 1918. As the Central Powers you must use the advantage of interior lines and the fighting skill of the Imperial German Army to win your rightful “Place in the Sun." As the Entente Powers (Allies) you must bring your greater numbers to bear to put an end to German militarism and ensure this is “The War to End All Wars." Both players will find their generalship and strategic abilities put to the test as Paths of Glory's innovative game systems let you recreate all the dramatic events of World War I.

This is the Sixth Printing of designer Ted Raicer’s award-winning classic card-driven game of the Great War. More than just a reprint, it is a Deluxe Edition, sure to delight players new and old. Polished by years of passionate play and heated discussion; this Deluxe Edition will apply the learnings of the past two decades to the rules, enhance game balance based on thousands of competitive playings, and take the physical components to a new level. As a bonus, this edition includes both the classic AND the historical scenario map used in today’s competitive play, adds the additional counters and strategy cards first released in the Paths of Glory Player’s Guide, and provides a carefully curated set of markers to enhance face to face play.