Lord of the Rings LCG: The Dunland Trap Adventure Pack 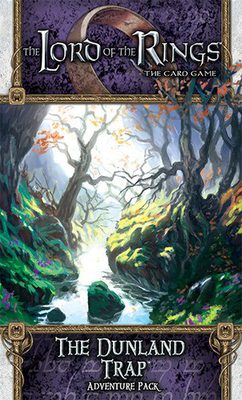 "Shall we bring our counsels together against evil days?"
–Saruman, The Two Towers

Is it possible to turn the Dark Lord’s foul arts against him?

In The Dunland Trap, some of Middle-earth’s greatest heroes aid Saruman the White to continue the work that he began in The Voice of Isengard deluxe expansion. As they seek to win a rare victory for the forces of good and their struggle against the Shadow of Mordor, the heroes must face new perils, including the threat posed by angry bands of militant Dunlendings!

The Dunland Trap features a combat-heavy new scenario, in which your heroes must battle their way to freedom against waves of ferocious Dunlendings. Additionally, among its sixty cards, you’ll find a new Silvan hero and three copies of each player card, many of which introduce greater shape and surprises to the Silvan trait. Moreover, as it begins The Ring-maker cycle, The Dunland Trap also provides more support for the Mount trait, as well as the Time X and Doomed X mechanics featured in The Voice of Isengard, and players will also discover thematic ties to Saruman and the White Council.