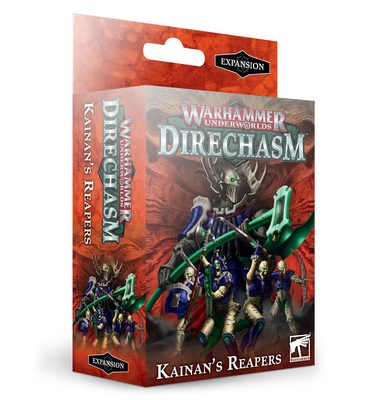 In stock (1 available)
Available in store (1)

When Nagash resolved to conquer Ghur, Kainan's Reapers were amongst the first forces he despatched, the tithekeepers sent to call in ancient debts and claim osseous stockpiles that might be used to bolster the Bonereapers' advance. The Mortisan Executioner Mir Kainan was charged with collecting the long-overdue tithe of the Silent People. When they arrived in Beastgrave, Kainan's Reapers found the Silent People had fled, their regular migration cycle interrupted by the mountain's anguished raging. They did not intend to return empty-handed, however. Direchasm's depths held countless ancient bones, and many rival warbands would pay the price for the Silent People's delinquency.

Bringing hitting power, magic, and disposable bone constructs to the living mountain, Kainan's Reapers are an incredibly flexible warband. Emphasise your preferred play style through the use of a range of warband-specific and universal cards, and their new tithe mechanic will help you inspire your warband. This set also features universal cards for any warband in Warhammer Underworlds, while a free downloadable warscroll lets you fight with Kainan's Reapers in Warhammer Age of Sigmar.

- A further 62 playable cards (only available in this set) to enhance your fighters and provide new tactics and challenges for your games of Warhammer Underworlds: Direchasm, including: