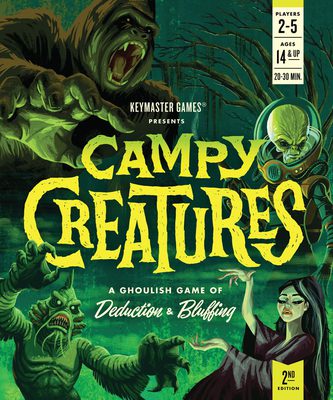 As mad scientists, each player has been tasked with the goal of capturing Mortals for future experimentation. Players have an army of Campy Creatures to do their bidding with three nights to get the job done. Be warned though—the Mortals won’t go out without a fight.

Each player is given an identical hands of Creatures. A turn begins when Mortals, Traps, or other Artifacts are revealed. Mortals are worth positive points, traps are negative, and artifacts give players different abilities. Each player simultaneously chooses a Creature and places it face-down. Once all have chosen, the Creatures are revealed and their abilities resolve. The Creature with the highest strength collects a card first, the second highest goes next, and so forth. A new turn begins when new Mortals, Traps, and Artifacts are revealed.

A night last six turns, and the player with the most victory points after three nights wins.