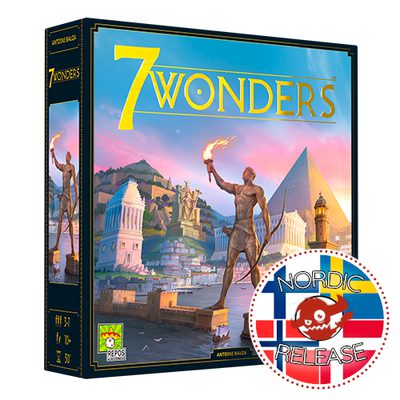 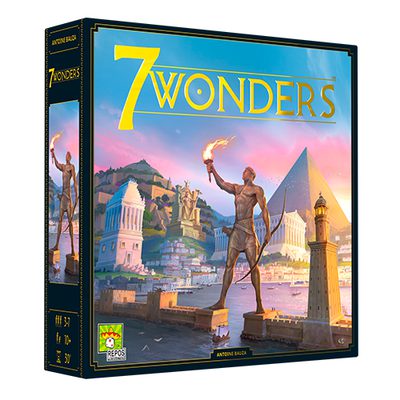 This is a Nordic release of the game. Get the rules in English from the official 7 wonders site: https://www.7wonders.net/en/games/7-wonders

7 Wonders - the most-awarded game on the planet

30 minutes with 7 players to develop your civilization, with no dead time.

Popularized by critics as well as by the thousands of players who have bought it to play with their family or friends. Since its release, 7 Wonders has won more than 30 awards in over 20 countries. 7 Wonders offers you the chance to take control of a prestigious civilization and make it prosper to victory.

7 Wonders is a card game with complete, accessible, and easy to set up rules for quick and rhythmic games.

Each of the 2 to 7 players takes the head of a legendary city (Babylon, Ephesus, Rhodes...), and will have three Ages to make it prosper and even build the legendary Wonder of the world associated to it. The object of the game is to embellish your city and make it more influential than that of your opponents.

In order to develop their city, the players will have a choice between 4 different development paths: Military, Scientific, Commercial, and Civilian.

At the end of the game, the player who tallied the most victory points is declared the winner.

The second edition comes with a lot of great improvements:

1) The rules have been entirely revised to make them more easily accessible to new players. The rulebook is now an 8-page booklet that’s much easier to grasp and understand!

2) New improved card layout: the player gains space at the table. The new layout of the cards allows for an easy read of information.

3) The guild cards, spread out over the many 7 Wonders expansions have been gathered and added to the new base game.

4) The size of the Wonders has increased allowing a better immersion into the game through the main theme of 7 Wonders, its Wonders! The size of the box of the base game and its expansions will also be larger, going for a standard-sized box. Still, to enhance the immersion into the game, sides A and B of the Wonders have been redesigned and are replaced by a day side and a night side.

5) 7 Wonders also took inspiration from the chaining in 7 Wonders Duel, and is now a bit more intuitive.

6) Thanks to symbols discreetly inserted in the contents of the game, 7 Wonders and its expansions are now adapted for colorblind players.