Gloomhaven Jaws of The Lion Review by Anna

I must confess to you. I bought Gloomhaven: Jaws of the Lion nearly a year ago, and it was all just sitting on my shelf up till the last few weeks.

Here’s how it happened. If you’re following board game news even a tiny bit, you must have heard of the mighty Gloomhaven, the game that broke all the records and has been the #1 game (of ALL games) in Board Game Geek. The moment it appears on the websites, it gets sold out nearly immediately. You must know by now, I was extremely curious about this game since I got into the hobby.

There was one but. The game is very difficult, and the fact that its video tutorials are usually very long did not ease my mind. Plus, I wasn’t that much into any gloomy battle games (or that’s what I thought). Then, the game is very long, having 90+ scenarios. Some game parties play it for over a year or longer. All of that together, in addition to the high price, was quite scared. I didn’t want to invest that much into a large legacy game that, god forbid, wouldn’t be loved by my gaming party (that scaled down to just me and my husband during lockdown time).

And that’s when Gloomhaven Jaws of the Lion was released. Following the industry news quite closely, I learned about the game very fast. My curiosity was unchanged and still challenged. Having read everything I could about the game, the decision was made. I got the game.

Gloomhaven Jaws of the Lion has everything the original Gloomhaven has, but it was promoted as an entry point to Gloomhaven. It’s shorter, cheaper, and easier to learn because game designers have thoroughly addressed the learning barrier.

That sounds like all my problems would’ve been solved, yet I was still quite lazy to watch five videos from Watch It Played, lasting more than 1 hour total, and I wish I weren’t!

Recently I got the occasion to finally get myself together and go through the rules of the game. And… I was so much better than I was expecting!

So let’s go through it all together.

You are a famous mercenary party, Jaws of the Lion, on a quest to uncover mystery disappearances and what is really going on in Gloomhaven. On your journey, you meet all kinds of creatures and monsters, who are all somehow linked to the mysterious crime.

The game is essentially a series of battles, with a bit of story in-between scenarios. The box contains 25 maps to 25 scenarios, but your campaign would be slightly shorter depending on what choices you make during the story part of the game. Jaws of the Lion is a cooperative game, where you all fight together against a common enemy (or enemies).

That said, if you ever played Dungeons and Dragons or any other role-playing game (RPG for short), the game would be quite similar in many ways when talking about battles. It’s also a turn-based battle strategy, where each turn, you select a few of the available actions.

However, that’s where the similarities end, as the mechanics and logic are pretty different. Although, if you did play one of the tabletop RPGs, understanding the logic and gameplay of Gloomhaven would be much-much easier (and just to mention, Gloomhaven is also much easier to play than those games). 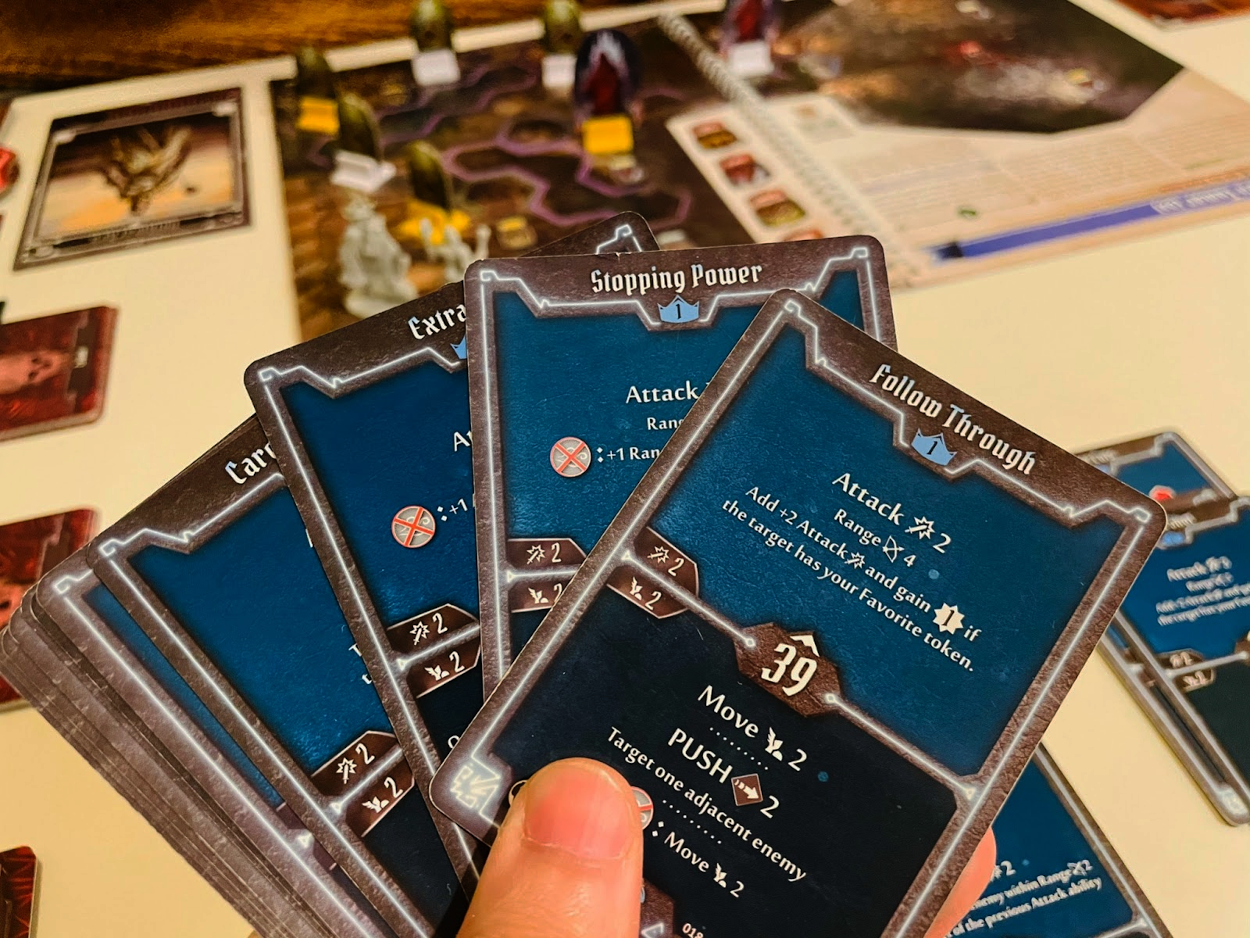 Battle. Yes, Gloomhaven is literally all about battles and monster encounters, but that does not take my enjoyment away. You have to make intelligent and strategic decisions now while heavily planning for the future.

Progression. As you explore the campaign, just like in any RPG, you get experience and level up. As you level up, you can strengthen your abilities, change attack modifiers, purchase equipment, and much more.

Story. Although the choices you make during the storytelling part of the game don’t affect the mostly linear campaign, it gives a lot of context, and you understand why it’s important to go on. The mystery part hooked me quite strongly, so I was looking forward to every bit of information about what is happening in the city. I have to add, this is not a story-driven game, and the story mainly exists to support the campaign. The flavor texts have still been engaging and entertaining.

Tutorial scenarios and videos. I have already mentioned how much easier the game is with video tutorials, and I’d be happy to say it again. Before buying the game or after you have it on your table, tune in and watch these videos of how to play the game. The game itself comes with five introductory scenarios, that slowly (but not too slow) introduce you to the game mechanics in an engaging (not exhausting) way. “Play while learning” is what Gloomhaven does very well.

Gloomhaven: Jaws of the Lion has been a fascinating experiment. Since I learned the rules and put the game on the table, it’s the only game we play (and we love it!). It’s not easy to learn, but the game does everything to help you do that. It does not require such a strong commitment as the original Gloomhaven.

If you have not played Gloomhaven yet, this is another reminder that despite having a story, this is not a story- or character-driven game. It’s a game of exciting encounters and battles.

If you have played Gloomhaven (and enjoyed it), you will find new classes, new monsters, and, most importantly, more Gloomhaven to explore.

So should you get it? If you are into strategic battles, turn-based coops, and love the idea of helping a city discover why people are disappearing, go and get it! :)

I’ve been playing for as long as I remember myself. When I was a kid I dreamt of building my own games, and now I’m trying to make it a reality. Board games carry me away into a different world where I can be a knight, a researcher, a kingdom builder, or a zombie fighter. Love semi-coop and engine-building games. Favorite game of all times: Dead of Winter.