When I first looked at the Strixhaven spoilers I have to admit I didn't pay much attention to Stonebinder's Familiar. I thought that the card needs too much work to be good in standard and there aren't enough synergistic cards that exiles things. After the first Boros Winota decks came out I noticed there was already 3 different cards in the decklist which naturally work with Familiar and basicly without an extra effort. The funny part is that each of them puts a card in exile in a different way. Skyclave Apparition puts a card in exile from the play, Elite Spellbinder puts a card in exile from the opponents hand and when you use Stomp side of Bonecrusher Giant it puts the card itself into exile.

Already with these 3 cards, the Familiar looked at least decent in the current Winota shell as an early non-human 1 -drop. But that wasn't enough for me, I wanted to push it further and make this card a serious threat that can carry the whole game if your opponents don't answer it in time. Stonebinder's Familiar can only get one +1/+1 counter in each of your turns, so we should build the deck in a way that maximizes the possibility to get that one counter in most of the following turns after playing it on turn 1. If we can do that, then the Familiars power level rises close to cards like Champion of the Parish or Pelt Collector.

I started to look for more good cards that work with Familiar. The card needs to be good enough on its own and it should one way or another fit into this Winota game plan. I quickly realized that adventure isn't the only mechanic in the current standard that exiles cards. In Kaldheim many of the powerful cards were put in exile with Foretell to wait for casting in the later turns with cheaper cost or for stronger effects. In Theros Beyond Death cards were recast from the graveyard with Escape. I also found a card that has been played a lot lately in a red agressive decks - Robber of the Rich. Especially the Robber which can exile a card turn after turn looked pretty sweet with Familiar. The only bad side of Robber is that it is a human so it doesn't trigger Winota. But after the changes we make the deck can win games without Winota and most of the time one or two Winota triggers are still enough to seal the deal.

When you play Familiar on turn one and Robber on turn two, you already attack for 4 damage in the same turn and even more in the future. Also, a start like T1 Familiar, T2 Foretelling Starnheim Unleashed, T3 make a 4/4 angel gives a good setup for the T4 Winota. A good thing in Starnheim Unleashed is that it can be played in a curve or you can put it into exile to wait for to be cast later after your opponent sweeps your earlier board. Those 4/4 Angels, even without the help of Blade Historian, can end the game pretty quickly. 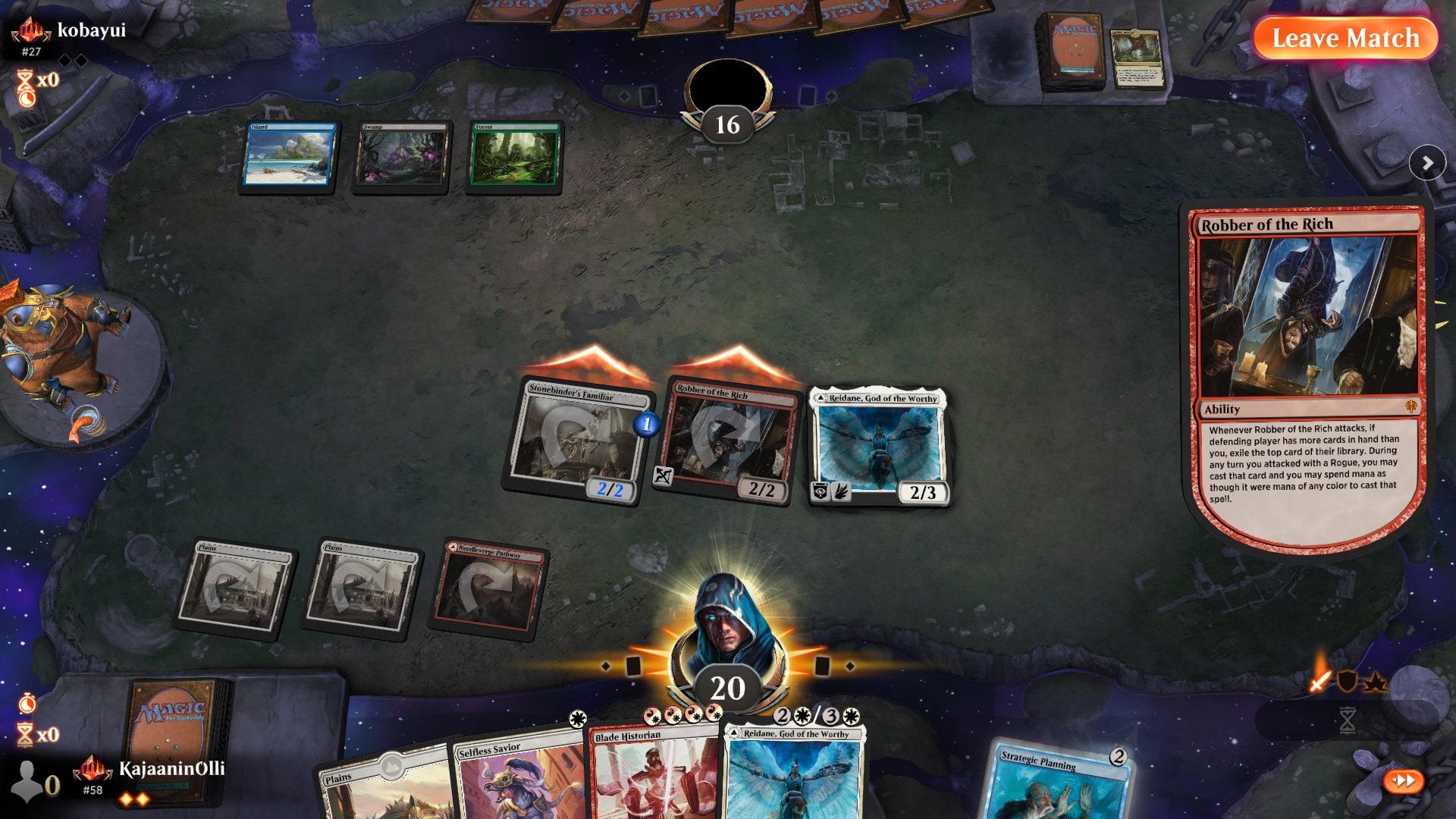 Here is the decklist I will play in this weekend's mythic qualifier. It's a really fun deck to play and I think it's pretty good in the current meta. The sideboard has cards like Reidane, God of the Worthy to slow your control opponents down and a lot of removals. In most of your aggro matchups, it's hard to get the Robbers to trigger and usually, the player on the play has a faster clock. In those games on the draw, I recommend sideboarding Robbers out and taking a more controlling role with extra removal. Despite being really fast this deck can also beat your opponents with pure value. Just trade cards in the early game and unleash your army of angels in the midgame to take the battlefield on your control.