Zendikar Rising has seen the daylight and the set included a nice variety of cards that will see play cross formats. For EDH players the set introduced some legendary creatures who can possibly be your next buildaround commanders for different power level commander decks!

In the latest article we covered the Zendikar Rising Commander decks, so if you are looking for decent low-power-level precon decks for casual gaming you should definitely check out the article and the decks!

Charix, the Raging Isle is a pretty hefty legendary crab that costs your opponents more to target. The activated ability let’s the player swing pretty hard but of course you have to pay attention not to drop the toughness of Charix under zero. Some kind of high tide variant could be the place for this funny creature or maybe even the boss for a crab tribal! Not sure if you have enough crabs to fill the lines though… Anyways: Charix is probably not a commander for cEDH but if innovative deck building is your thing, this commander will most definitely lead you to interesting waters indeed. 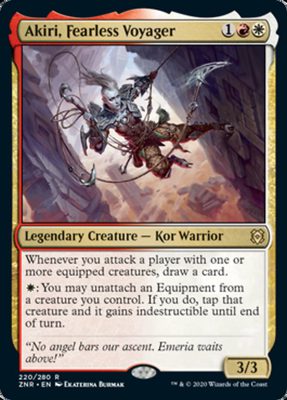 Let’s face it. Boros is the worst two-color combination in EDH. The reason for this is purely simple: The card advantage for these colors lacks in existence. In 1 vs. 1 Boros usually can run away with the game because of it’s aggressive playstyle but as the games of EDH last longer in total, the boros decks usually get outgunned by the card advantage the other colors support. In a previous article last spring we covered a Feather the Redeemed EDH-deck and until now Feather has been the most prominent captain for your company of Boros colored cards as it can generate card advantage thus making it a playable two-color combination.

Akiri, Fearless Voyager is a possible new combatant for the crown of Boros. As long as you have enough equipment in your deck you will draw an extra card each time you attack with an equipped creature. With the ability to protect the equipped creature (it being Akiri or some other creature) from destroy effects by paying white mana and unequipping an equipment is also something you definitely need. There have been some other equipment-themed commanders in the past years as well but Boros Akiri does the thing that matters the most: Provides card advantage. Is this the next top commander for Boros?

Mono green ramp is probably one of the most iconic deck archetypes of EDH. Commanders vary between Selvala, Heart of The Wilds, Nissa, Vastwood Seer, Azusa, Lost but Seeking and many others. Ashaya, Soul of The Wild has made it to the card (the original Ashaya was a token created by Nissa, Sage Animist planeswalker) and it offers a pretty nice though traditional environment to build a mono green deck. Ashaya will generate a ton of mana!

Another option for the deckbuilding is to include some combos like Ashaya + Krosan Restorer and having threshold to make infinite mana. After this the player may cast something like Genesis Wave for gazillion mana and slam all the creatures and permanents from their deck to the battlefield. And with cards like Concordant Crossroads, Avenger of Zendikar and Craterhoof Behemoth you can easily deal enough damage to all your enemies on one swing.

Yasharn, Impacable Earth is a pretty staxy boar who prevents the players to pay life or sacrifice nonland permanents for casting spells or activating abilities. Fetch-lands? No. Treasure tokens? No. Yasharn is selesnya colored so if you are up to make your first stax/hatebears deck this can be a starting point if you are not up to spending too much moneys for the land base (at least the fetch lands you should not put into this deck).

Yasharn is something you could see also in cEDH table but it is possible that it just doesn’t have enough power to close the game. Some kind of elfpool, selesnya big mana with stax can be the best thing to build around Yasharn.

The fourth iteration of Omnath is here and the big mana/landfall theme is still going strong. Omnath is definitely one of my favorite cards from this set and offers a ton of different options on how to build the deck.

The first thing to look at is some kind of land matters deck which this Omnath would fit perfectly. Green has loads of land support so you would definitely get the best out of Omnath’s triggers. As the Omnath now has all but black color in it’s color pie it can definitely do a lot of different things. For cEDH the lack of black is probably a slight no-no as you will miss some of the fast mana and the black tutor cards. For mid-power or even slightly higher the Omnath will definitely offer many possibilities of cards to put in! 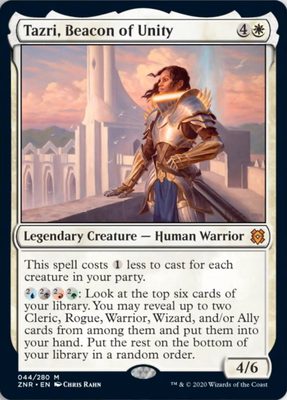 Talking about the interesting commanders from Zendikar Rising: Tazri has returned! Again in five colors Tazri, Beacon of Unity offers the most interesting card to build around in the set - at least in my opinion. I have to admit that I have kind of underestimated the party mechanic introduced in Zendikar Rising and that is the main reason I didn’t find the Tazri so interesting in the first place. After all there is a lot of cards you can find with Tazri’s ability and if you get infinite colorless or colored mana you can easily take all your creatures filling the party rule from your deck. This makes Tazri to be at it’s best in some kind of hatebear/stax/blood pod archetype with something like Timestream Navigator + Grenzo, Dungeon Warden as the finishing combo for infinite turns.

Tazri also finds the “easiest win in magic’s history” card Thassa’s Oracle so get your five color cEDH cards together and start the brew! For people not so into cEDH Tazri provides a neat way to make a perfect utility deck with a ton of nice utility creatures.