The hunt for the best commander cards continues! This time we will be looking into the best cards from the color black. In Deck Check, there is again a very nice deck to be checked! It also contains quite many cards from this list so remember to check that out as well!

Black in MTG is the darkest color also by its nature. Many of the cards have drawn influences from stories and creatures related to death. In-game, black cards usually have something to do with paying life for other resources, draining life from opponents, sacrificing creatures, discarding cards, and different creature removal spells. Black also offers the most resilient tutors in Magic and the black tutors don't usually have restrictions for the card types they can tutor for. These factors make black a very strong color and it is also why it is very much played in the commander format. As we know from the previous article, black is also the best color for reanimation.

So let's get our hands dirty and dig into the black commander cards! 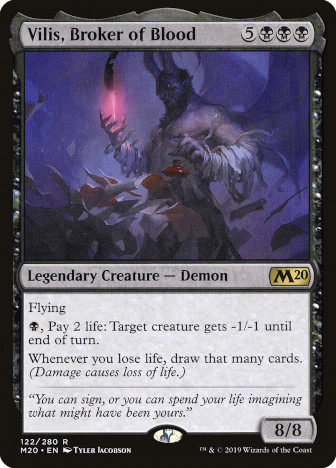 Vilis is like a commander legal Griselbrand and will give its controller a ton of card advantage. This huge, flying demon costs eight mana to cast but as we know, black is pretty good to reanimate this card with just a couple of black mana. This card also makes a nice "combo" with the card Reanimate thus letting its controller draw eight cards straight away. The ability of this demon also gives card advantage at a fairly low cost. Vilis is possibly one of the best card advantage creatures black can play in the Commander. 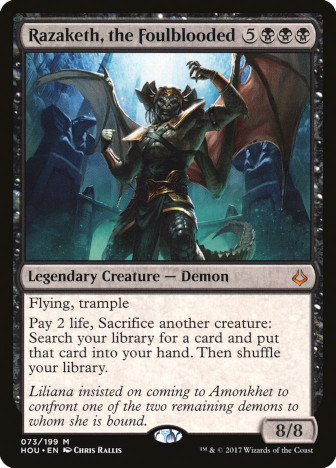 If Vilis lets you draw cards, Razaketh is a bit more finesse tool to sculpt your hand for your favor. Tokens and life are transferred to Demonic tutors and with instant speed. The creature itself is also big and nasty! This creature works also pretty well in the reanimator decks because of its pretty high mana cost. 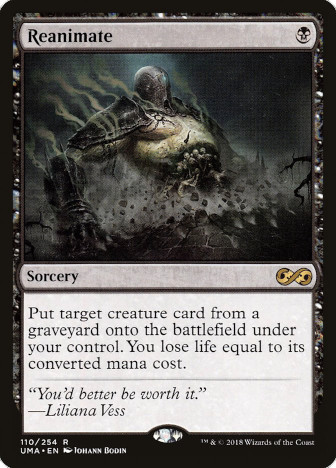 From great reanimate targets, we can dive into the best reanimation spell! Reanimate is the most powerful one-mana reanimation card with no restrictions on how big creatures it can target. It also works for your opponents' graveyards too making it a very flexible card. Where you up to win the game or just steal the biggest and baddest creature from the graveyard, this card should be your go-to reanimation spell. The only drawback is the life loss but in commander, you probably are ok with this. 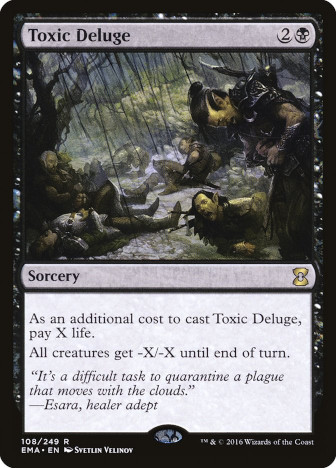 Three mana board wipe that can take out indestructible creatures as well. In mana efficiency, this card is the best board wipe from black. At worst, you can use this to get rid of one creature. At its best, this will clear the board with just one card and some life. Toxic Deluge is arguably one of the best board wipes in Magic history. 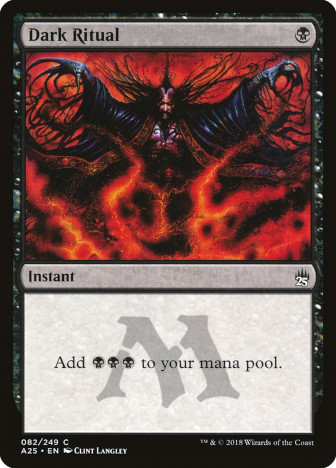 From mana producing rituals, Dark Ritual is probably the best of all times producing three black mana with only one. The other rituals usually need some condition to be stronger than this, usually either more cards in the grave or sacrificing a creature. The more competitive your playgroup is the more powerful this card gets. 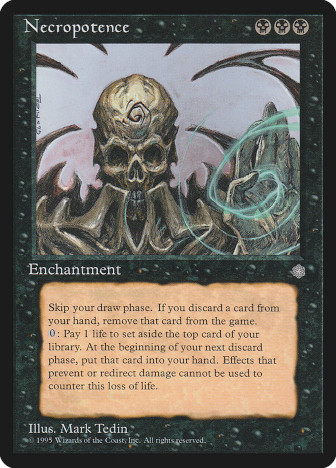 Yawgmoth's Bargain remains banned in commander, but Necropotence is probably the closest equivalent for it that you can still play. Despite its drawbacks, this card can give you a massive card advantage by just paying life. 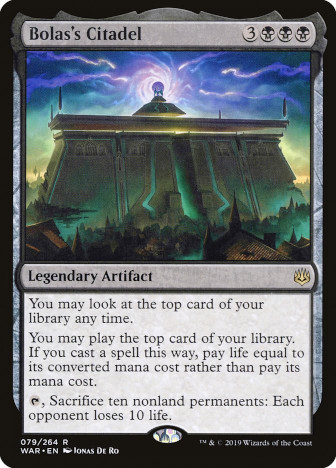 War of The Spark gave some pretty strong Planeswalkers for MTG. Besides those, there are also cards like Bolas's Citadel that saw the daylight in the release of WAR. It's again card advantage in a very black form: Paying life let's you cast spells from the top of your library! Sensei's Divining Top with this card will let you build your own Yawgmoth's Bargain and draw extra lands away from the top of your deck, thus letting you continue with your storm turn! 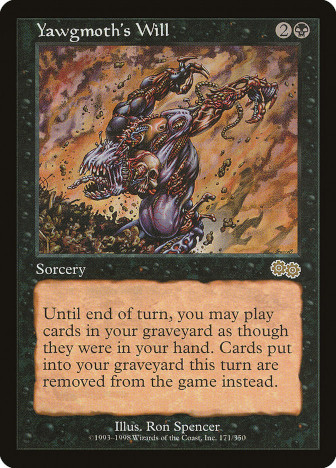 Yawgmoth's name has popped up in this article already multiple times and Yawgmoth is probably one of the strongest and oldest persons in the MTG history. There are some cards named after this dude and it seems that this guy had some strong will. YawgWill is a common wincon card for the vintage storm but it can easily win you a game of Commander as well. The only drawback is your cards will be exiled instead of going to your graveyard. 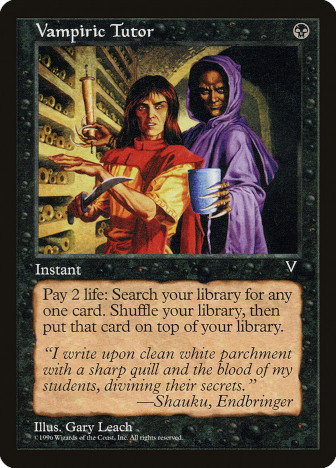 In the cavalcade of black tutor cards, Vampiric Tutor is the most mana efficient. Compared to Imperial Seal, this one is instant-speed thus making it a tad better. This card remains as the best one-mana tutor there is in MTG. 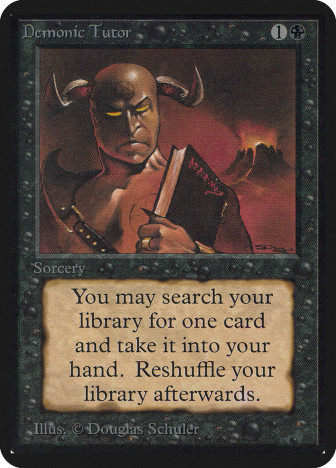 If Vampiric Tutor is the most mana efficient tutor in MTG, Demonic Tutor is solely the best tutor in MTG. This card costs two mana but lets you search for your favorite (or the most needed for the situation) card straight to your hand. This reduces the interaction people can more easily use against top deck tutors, such as milling the card to an opponent's graveyard.

This time in Deck Check we will check out some cool Black-Red or as MTG players know Rakdos-colored Commander deck! This deck has been built around its commander Kroxa, Titan of Death's Hunger. Kroxa was introduced in Theros Beyond Death and despite its young age, the card has already seen play in decks like Modern Jund.

The deck focuses on discard-effects. As a wincon, this deck plays the Worldgorger Dragon and Animate Dead combo. With this combo, you can make infinite mana and then play Kroxa from the command zone enough times to all other players lose the game. The other option to sink the infinite mana is for example Torment of Hailfire.

Besides the combo, and discard effects, there are interaction, reanimation, and card draw effects in the deck with some fast mana in the form of artifacts and rituals. To slow the other players down, the deck also plays Blood Moon and Leyline of the Void. The deck seems to be pretty well made and it is built very nicely around its theme.

Kroxa is very interesting as a commander and you can build a nice and strong, discard-focused deck around it. Because of its attack trigger, the creature is also strong on the battlefield and gives the deck some reach in the later game as well.

By its power level, the deck seems to be well suited both for cEDH and also for a tad more casual gaming. In the most casual environment, the deck might be super strong. Discard effects are effective in more competitive tables but in casual gaming some decks are pretty good to survive also through this kind of distraction.

Budget wise the deck is more on the expensive side but not yet in the "overkill" category.

Ikoria: Lair of Behemoths is approaching! 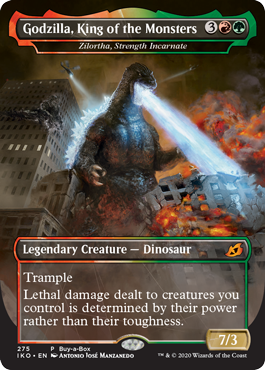 RAWR! There are 19 Godzilla Series showcase monsters in Ikoria. One of them is the buy-a-box promo, Godzilla King of Monsters. You can get this bad boy in foil by only buying a Booster Box.

Who would have guessed that Godzillas will make an appearance in Magic? There are 19 showcase versions of these gigantic monsters. One of them is the buy-a-box promo King of Monsters and three of them are Japanese cousins, which are only available in the Asian market. This is probably the best time ever to purchase an Ikoria: Lair of Behemoths Draft Booster Display Box (or multiples!) since there is a whole list of amazing offers and bonus products to go with it.

Here are all the benefits of preordering a booster box:

And there is more! By preordering a Booster Box (or any products to be honest) you'll also support your local gaming store during these odd times. We are even allowed to ship buy-a-box promos and box toppers, so you will get all the benefits even with post orders.

There are thrilling news on the Commander front. Ikoria brings 5 brand new Commander Decks! All the decks are available for preorder and if you order Ikoria Commander 2020 Display during April, we will add a Premium Promo Pack as a throw-in! In the upcoming Poroscope articles we will take a deeper look into the five new Commanders and their decks.

But before that, we wish you a great Easter! See you again in the next episode of Poroscope.