How to play with Pokémon cards

How do you actually play with Pokémon cards?

This question is often asked, especially by children. Back in our school days, we dismissed any kind of rules and just let the Pokémon with the highest hit points be crowned the winner of battle.

In this article, we’ve summed up the actual rules of the Pokémon card game into one compact package. With many folks being stuck at home, this is truly the perfect time learn a new game - and what better game is there than Pokémon? When you’ve picked up the basics, the advanced course for the Pokémon card game can be found here.

Before diving into the rules of the Pokémon game itself, let's first take a look at Pokémon's interesting history.

Pokémon was born in 1996, when Japanese Satoshi Tajir developed the first Pokémon games  (Pokémon Red and Pokémon Blue) for the Nintendo Game Boy. The anime series soon followed, telling the story of the adventures of Ash Ketchum and the most iconic Pokémon of all time, Pikachu. Pikachu actually ended up being the starting Pokémon for Pokémon Yellow (released soon after Pokémon Red and Pokémon Blue).  Pikachu soon became a favorite among children, as well as parents.

The first Pokémon film, called Mewtwo's Counterattack, was shown in Finnish cinemas in the year 2000 – so, over 20 years ago. Do you still remember how many original Pokémon there were in the series? The answer is 151, whereas today, we’re almost at a 1000 Pokémon.

Today, Pokémon is a major international phenomenon – as shown by the Pokémon Go boom in July 2016. Over the years, 23 different Pokémon movies have been released – the latest being the super-successful Detective Pikachu (released in May 2019).

Alright so - back to the Pokémon card game, also known as the Pokémon TCG (trading card game). The first cards appeared in 1996, and some of the Pokémon in the first set are really rare collectibles. Actually, it's worth visiting your basement or your attic – you might find some old Pokémon treasures there.

If you don’t have old Pokémon-cards at hand - don’t worry. Today, a variety of Pokémon products are available, so you can have your pick. Ready-to-play Pokémon theme decks are a great and affordable choice for a quick start to playing. If you want, you can expand your own collection by purchasing booster packs or various collection and elite trainer boxes. In addition to this, our selection includes assortments of already opened Pokémon cards. The Pokemon kilobox contains a kilo worth of Miscellaneous Pokémon Cards and the Pokemon Shiny Box contains 50 Misc Shiny Cards. So, there’s surely something suitable for Pokémon trainers of all levels.

Pokémon is a two-person game where each player has a deck of 60 cards. One two-player match lasts 15-45 minutes. The game is won by the player who first knocks out six of the opponents Pokémon, and thus collects six Prize cards. If a player should draw a card, and is out of cards in his deck, he loses the game. The game is also lost if your own active Pokémon is knocked out and there is no new Basic Pokémon on the bench to ssend out into battle. 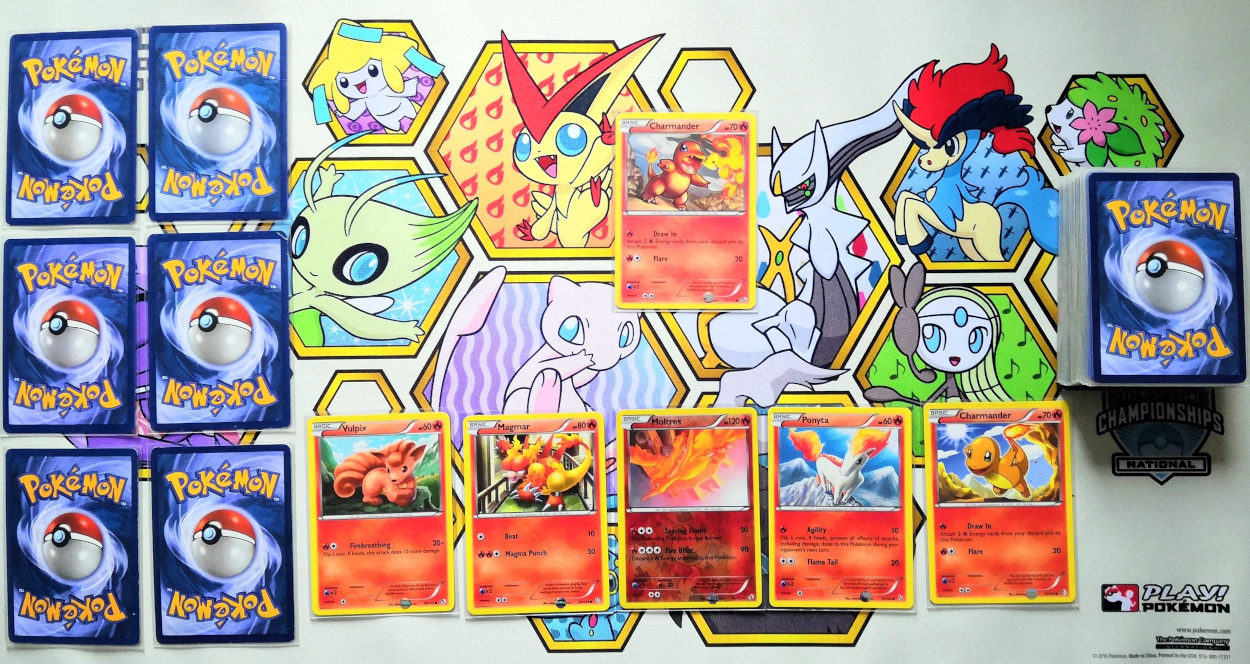 The player who wins the dice roll/coin toss starts. The starting player may NOT attack or play a Supporter card.

Each turn consists of the following:

When you attack an opponent,their active Pokémon takes damage equal to the attack power of your Pokémon (mark this by placing a dice or damage counter on top of the damaged Pokémon, 1 dice eye count = 10 damage points). In addition to this, any possible effects of your Pokémon's attack will also be activated. Not all attacks have an effect, other than inflicting damage points.

The opponent's Pokémon gets knocked out when he runs out of health points. The knocked-out Pokémon's trainer then switches to one of his Pokémon waiting on the bench. The player who knocks out a Pokémon receives one prize card, and the game continues (some Pokémon might earn you more than one prize card). The first player to collect six prize cards will be crowned the winning Pokémon trainer! 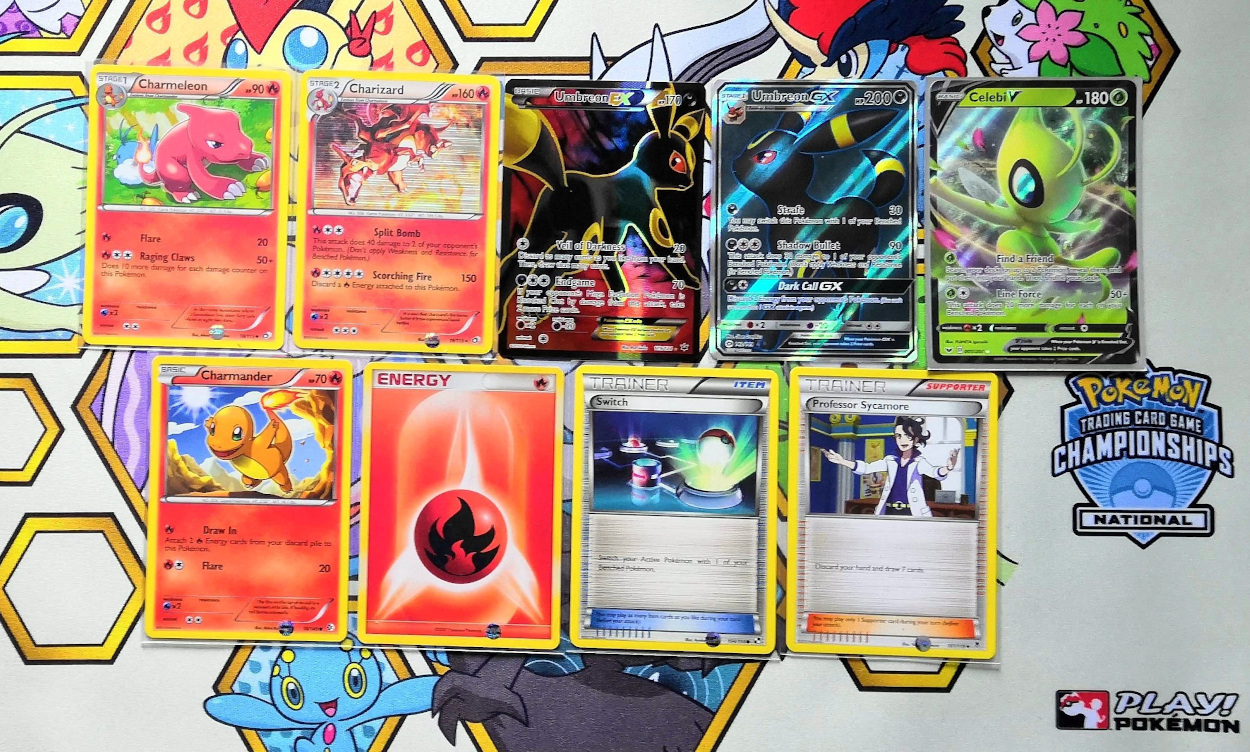 Pokémon, like other trading card games, has several different card types. Card types differ in their features and uses. The following is an overview of each different type of card.

Basic Pokémon - The basis of everything. A Pokémon that a player can place directly into battle from their starting hand or bench. Strong GX, EX, or V-type Pokémon can also be starting Pokémon.

Evolved Pokémon - Basic Pokémon evolution forms. Once you have played Basic Pokémon in your previous turn, you can upgrade it to its next form on your next turn. You will recognize these forms from the left corner of the card, which reads “Stage” or “Evolves From” and contains an image of the previous form.

Energy - An energy card that provides a single color of energy (eg fire energy) to a fire type Pokémon. Any type of energy can be used for a Pokémon that requires white star energy.

Trainer Item - A variety of items that dictate certain actions. For example, a Trainer Item can search the deck for Pokémon or switch from one active Pokémon to another. You may play any number of these per turn.

Trainer Stadium - Various places where Pokémon fights take place. The card is played to the side of the table and the effect on it is valid for both players, for the time being. For example, one damage counter for an EX or GX type Pokémon is added between turns. When another Trainer Stadium card is played, the old one goes to the discard pile of the player, whose card it originally was.

That’s all for this time. I hope you got the hang of the world of Pokémon, and that you dare to take your first steps as a Pokémon trainer. The rules of the Pokémon card game are, after all, quite simple and easy to learn. So go forth and play!

How to play with Pokémon-cards, part 2!

Be sure to also join Poromagia's very own Poromagia Pokemon Facebook group to stay updated on latest events in the Pokémon world.