This week we will cover a Feather, the Redeemed deck in our Deck Check Portion! Sunforger, Conqueror's Flail, and card draw spells such as Psychotic Fury are the core of the deck.

Poroskooppi will begin a new series of "Top 10 Commander Cards" articles from this article on! These articles will be published every other week. In this article, we will start from the first color in the palette, white. Deck Check will once again cover something spicy and tasty so be sure to stay with us until the very end!

In Magic: the Gathering, white has always been a creature-based color with taxing effects and mass removal. In this article, I will list my favorite ten cards from white in commander format! 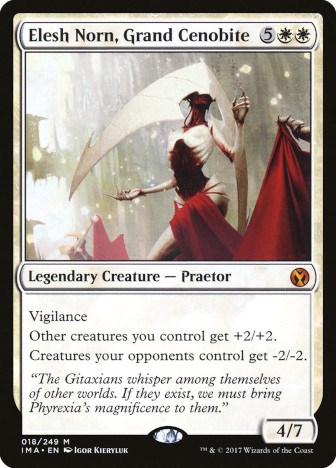 From the cycle of Praetors, Elesh Norn has probably one of the strongest effects on the battlefield. In this creature, you will find a very powerful anthem-effect with a one-sided board wipe also included in the package. If you are about to play white in your deck and you trust in sheer attack power, this card is a staple for your deck. With seven mana you also get a very decent 4/7 Vigilance creature to block the threats of your opponents now shrunk creatures. In the reanimator archetype, this will slow down the creature-based decks a lot. 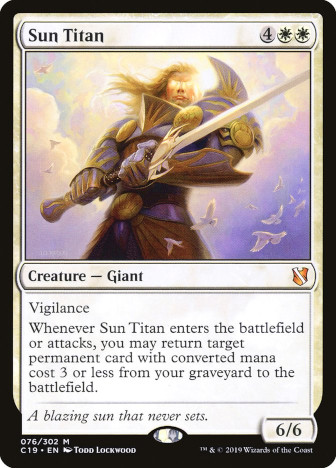 From Praetors to Titans, Sun Titan is a nice take from its own cycle of creatures. All creatures except the Primeval Titan (which we already covered in the previous article of bans and restrictions) from this cycle are legal in the commander. The white titan will return permanents from your graveyard to the battlefield when it enters the battlefield as well as when it attacks. You can abuse this with something like Peacekeeper or just to play pure value returning whatever you need to get back! In the worst case, Sun Titan offers you mana advantage if you happen to have fetch land in your graveyard. 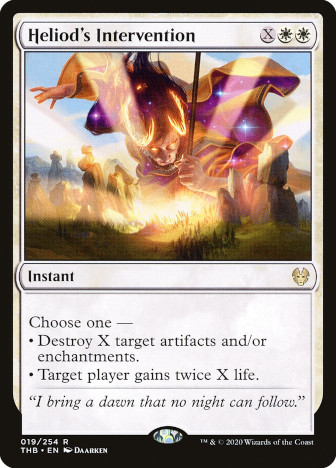 Theros Beyond Death introduced some very neat cards! The white Intervention is probably the most powerful in commander giving you the opportunity to smash multiple artifacts or enchantments with one shot and in instant speed! In case you are struggling with low life total this card might give you the needed amount of life to remain in the game for a critical tad longer. All in all, a good addition to the removal palette of white with an extra twist! 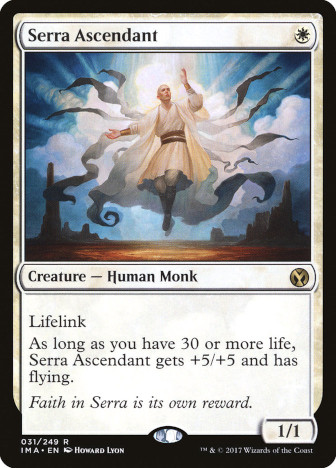 From this list, you will find a total of three creatures. Let's get serious: The Serra Ascendant is broken in commander format. This creature is eventually one-mana 6/6 Flying Lifelink creature that will easily swing the life totals for your advantage thus making it a powerful beat stick especially in competitive EDH. Its probably the most powerful one mana creature in commander if you condemn by the stats. 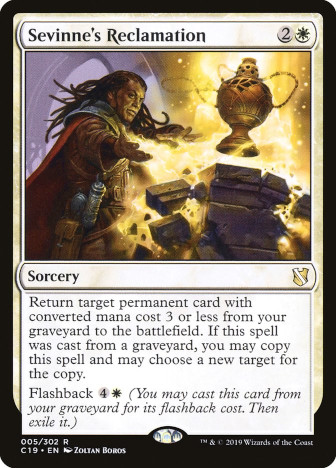 How about Sun Titan's effect with three mana and a flashback? This spell lets you return the important combo pieces from your graveyard back to the battlefield. Printed with some other nice cards in Commander 2019, this card is a must include for everyone who wants to return their important permanents back to action. And despite that, you might still want to play it to just gain value from your once used permanents or to return your beloved Serra Ascendant back to the game.

This removal doesn't really need handshakes or hellos. The Peanutbutter and jelly of every white commander deck, this removal is probably the most efficient answer to any creature in the format. The life gain is not as critical in the 40 starting life total format so there is possibly no reason not to play this if you play white color in your deck. 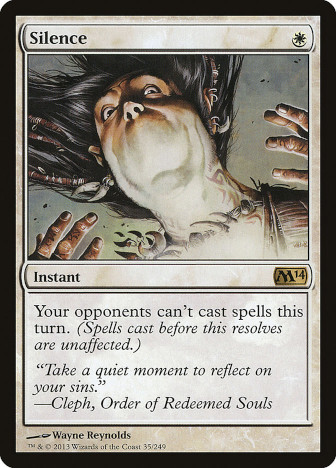 Shutting down your opponent's combo turn or protecting your own combo with only one mana is a very strong effect. If you play combo and white, I highly suggest you play silence. It's a very straight forward effect for such a low mana cost that playing it in your deck doesn't actually demand anything. Despite casting spells, your opponents are still able to use abilities but that hardly is a problem. 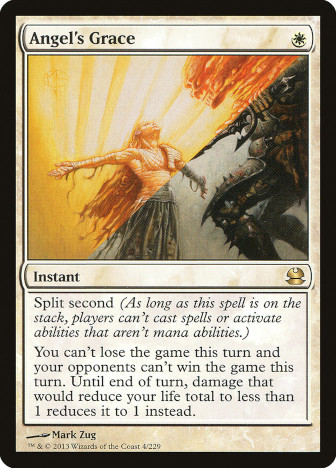 What if you would lose the game but instantly you don't? Angel's Grace is like the big sister of Silence but instead of stopping people from casting spells, it grants you some extra space to breathe. It also stops things that your opponent's play that would win the game, as they can't and you cannot lose. Paired with Ad Nauseam, this card also lets you draw your whole deck. Split-second ability also says that this spell is probably going to resolve in the first place anyway so it has deserved its slot this high on the list. 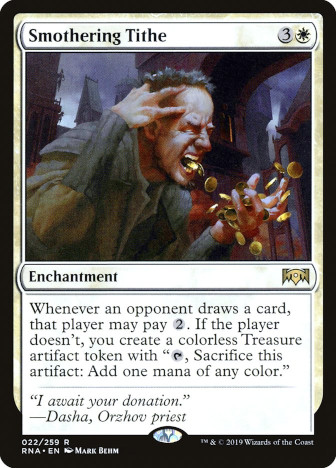 This card gets really good when you have more than one enemy. Getting mana advantage with white color is pretty good and casting such cards as Windfall and Wheel of Fortune in combination with this enchantment, you will probably end up having such a pile of treasures that you can literally cast anything. 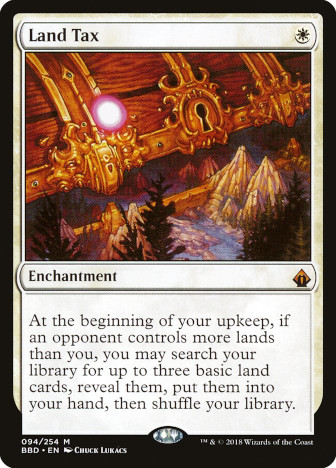 Ancestral Recall is banned in commander but it's white version lets you probably draw three cards - they will all be basic lands though. Land Tax is card advantage and mana fixing in the same package and casting all this with just one mana. The white color is lacking card draw effects so this is why this card is worth getting the first place on this list.

Our theme color in this article is white so in Deck Check, we will look into Arno Laine's white red Feather, the Redeemed commander deck. The budget for this deck is far on the expensive side and it is built for competitive EDH.

White-Red, also known as Boros will usually need some taxing or restricting effects, such as Stranglehold, Aven Mindcensor, Magus of The Moon and Aura of Silence.

Boros is considered one of the weaker color combinations in Magic though red as a color has received some very strong cards lately. Such cards are for example Underworld Breach and Dockside Extortionist. These two cards have helped to raise the power level of red on a whole new level! Both of these cards can be found in this deck as well.

Feather, the Redeemed was introduced in War of The Spark and it became straight away one of the best Boros commanders. Its excellence can be found in its ability to re-buy card drawing spells that target it. This way the deck can build up card advantage and in addition to being a flying attacker, it is also the main card draw engine for the deck. Another card advantage tool is equipment Sunforger which can tutor for red or white spells for various purposes from the player's deck.

The deck includes some winning combos. For example with Underworld Breach, Lion's Eye Diamond and Wheel of Fortune the player can chain multiple draws and completely empty the opponent's decks. Angel's Grace can be used not to lose the game for drawing from an empty deck thus leading the opponents to lose the game. Another possibility is to make infinite mana with Auriok Salvagers and Lion's Eye Diamond and tutor all your good spells with Sunforger.

Sunforger can tutor for white or red spells. In case they are drawn naturally, they can be cast also the normal way. Silence, Angel's Grace and Fists of Flame are important cards in the deck's strategy.

The last resort, if all fails is the legendary: Beats by Boros! Because of the commander damage rule, the player may buff the Feather by chaining some spells and then finish the enemies off one by one with one or two hits. To keep in pace with other decks, white-red will probably want to play some taxing effects. The color combination lacks the insanely good tutors from black so the best way to counteract this is to play cards like Magus of The Moon, Stranglehold, and Aura of Silence.

The deck is a very interesting entity and playing Boros in a competitive environment is a bold move overall! All in all, Feather is a very solid draw engine and built around the Sunforger, the deck can overcome the usual weaknesses of Boros.

Budget wise the deck is built with a hefty amount of money, but the core of the deck consisting of Feather and the cheap cantrips do not cost too much. I dare to state that this kind of engine could be implemented also to the less competitive meta.

Mystery Booster will be released on Friday 13th March. Boosters and Boxes are available for preorder. Single cards are being added to the stock, so it's a good idea to check your favorite cards to add in your pocket. Have a nice Magic week!