This week's Poroskooppi will look into commander gaming on a more general level! We'll look into the differences between competitive and casual commander decks. This article will also cover another interesting Commander deck in the Deck Check section. You'll also find a picture of the x-0 deck of the Wednesday modern and recap for the Poro Tour point status just before we dive into the first PoroFest of the year 2020 and Poro Tour Modern #1!

Generally, the commander format can be split into two variants: cEDH which means competitive EDH and casual EDH. The split between these two is more of a thin red line than a clear cut case. Both are played with the exact same rules and restrictions but the differences are more about attitudes, the goal of the game and the power level of the decks been played.

The Original EDH started as a casual, fun to play multiplayer format. The cEDH side of the coin is boosted, usually, a way more competitive version of the format mainly focused purely on winning the game as fast as possible. Between the attitude of these formats, the competitive decks can cost multiple times the price of a casual commander deck. The reason for this is simple: more powerful cards cost more money. Despite the deck building fact, the biggest differences are in the mental side and attitudes: cEDH is a race for the win (or deny other players from winning) and casual EDH is focused on having fun and also building decks that might not be super powerful but have funny synergies and interactions between the cards. The deck-building factor is also relevant in the cEDH but as most of the combo lines have already been covered the space to build new decks and archetypes is more restricted than in casual.

This kind of split might lead to a conclusion of casual EDH being fun to play and interactive where cEDH is a try-hard rush to victory with no room for having fun. In fact, the fun-factor of the game is more reliant on the similar attitudes and goals in playing EDH than on the overall level of the decks played. The group playing affects the atmosphere of the game the most. On behalf of myself, the most disappointing gaming experiences in the commander environment have been the ones where the power levels in the decks don't meet or the players don't share the same ideals of what is fun Magic overall.

The easiest way to find out the power level of the decks in a new environment is actually pretty simple. As you sit on a new table of previously unknown players you might want to ask how powerful decks people are playing. There are also various guides on the internet about how to measure the power level of your deck. As the pure power level of a deck is not easily determined by scales or measurements these guides can be used as a guideline for describing the way your deck is playing. The rough scale for the deck's power is reliant on how fast the deck can actually win the game. On a scale of 1 to 10, a deck that can win until around turn four is evaluated to be something between 8 and 10. The decks that are evaluated 9 or 10 usually can win the game until turn 3 and will actually do it pretty consistently.

These kinds of effects can slow the faster decks down enough for slower deck to keep in pace.

On the lower end of the scale, the games usually take way longer than this. Roughly the difference between casual and competitive is made if the game lasts longer than turn 6 or 7: everything faster than this is considered competitive and longer than this casual. Roughly. Though a deck that wins after turn 8 can still be competitive: it might play various game slowing elements or cards that will make the game harder for the faster decks to win and win by some slower ways like dealing lethal combat damage. Because of this, the scale that measures the power level by the turn the deck can win is controversial and not such a clear indicator of the possible power level of a commander deck which leads to the original idea of communicating with the players you are playing with. This is also a good way to get to know new people to play Magic with.

So, should all commander decks be improved to the competitive level? The answer can be yes, no or maybe. Some of the commander eligible creatures just lack the power level to be competitive commanders but they might be perfect for interesting interactions or synergies in the right composition of a commander deck. While building a new deck or making improvements to an already existent deck the first thing to keep in mind should be the environment the deck is built for and what kind of deck you as a player would like to play. After all the best deck is always the one you enjoy playing.

In this week's Deck Check section we will look into a Pirate tribal by Eero Urala. The commander for the deck is the one and only Admiral Beckett Brass.

Cover of Darkness is a strong card in a tribal deck. Transformed Storm The Vault will provide lots of mana.

The whole deck is built around the pirate theme in a way that its aim is also to steal the opponent's permanents from the battlefield, using either the ability of Admiral Becket Brass or other cards with similar effects - just like the good old pirates would do! The deck is more of the casual side but includes many delicious synergies and interactions. There are also strong cards included in the deck such as Expropriate and Storm The Vault, which will flip to become a land with similar mana ability as the very well known but commander banned Tolarian Academy. One more special honor goes to the thief of thieves, Dack Fayden.

Dack Fayden is one of the most powerful planeswalkers in Magic The Gathering. Revel in Riches lets the player win just by controlling enough treasure tokens.

Besides combat damage, the deck can also win with Revel in Riches if the player controls enough Treasures.

All in all the deck is very flavorful built around the pirate theme which will definitely add some flavor points! The budget for the deck is lower-mid class. 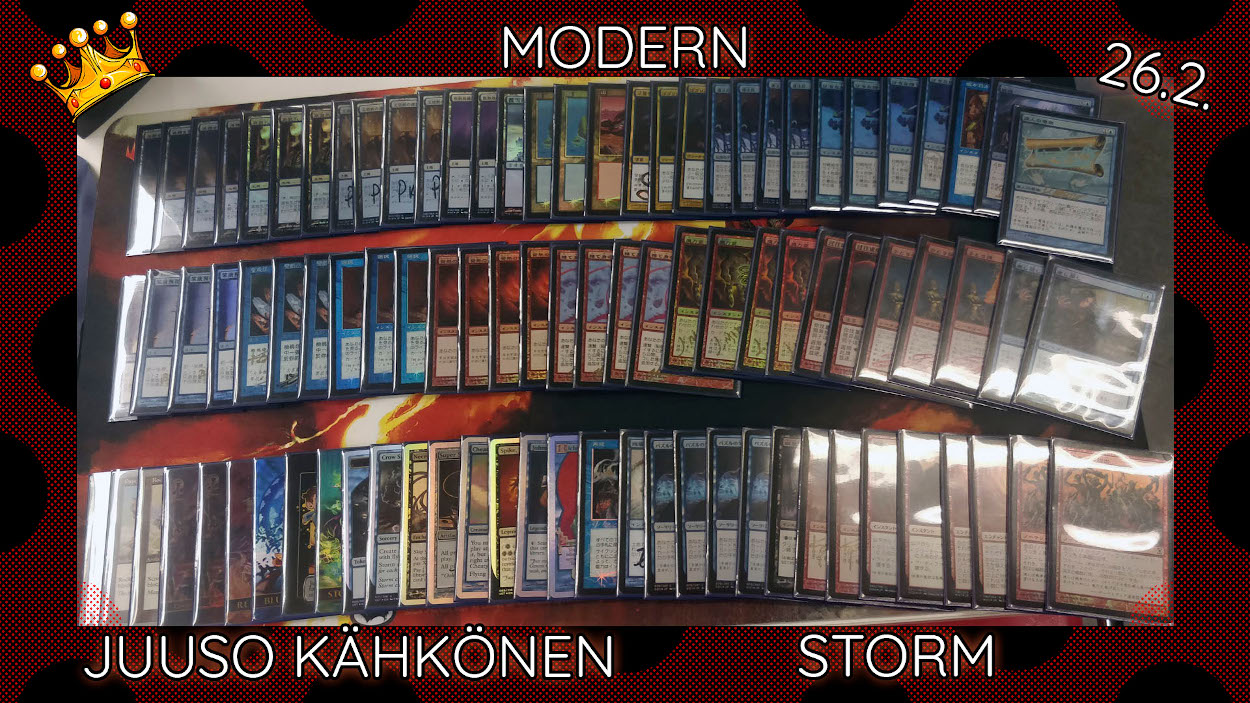 Juuso Kähkönen was undefeated once again on Wednesday Modern. This was Juuso's fourth victory of the year. Congratulations Juuso! The first BYE of the Poro Tour went to Kalle Saleva, who gathered 10 poro points by winning Poro GP Modern. Well done Kalle! The full poro point table can be found here.

See you this weekend at PoroFest!